From Conflict to Reconciliation – Stories of Hope from the Middle East

Lebanese and Syrian grassroots peacemakers told their moving stories to a full audience at Initiatives of Change’s London base, 24 Greencoat Place, on 10 May. They were speaking as part of their tour of the UK. To those who know about recent Syrian-Lebanese history, a group of Lebanese and Syrians wishing to travel together to express a common message is intriguing. Even more intriguing in light of the current tensions in the region is that the group consist of Muslims – Sunni and Shia – and a Christian.

Syria is facing extreme difficulties. ‘Syria is the most extreme humanitarian crisis since World War Two. It is the world’s war’ commented Dr Scherto Gill, chair and Executive Secretary of the GuerrandHermès Foundation for Peace, a partner to the event.

We heard from Assaad Chaftari and Haidar Ammacha. They are members of Fighters for Peace, a group of Lebanese former militia fighters who fought on opposite sides during the Lebanese civil war (1975- 1990), but who have since come to regret their role in it. Fighters for Peace work to persuade young people not to be caught up in the conflict in neighbouring Syria. In the last three years, they have spoken to over 15,000 young people in schools and universities to ‘de-romanticise’ the image of war.

‘I went from a Christian boy serving at mass, to a man with blood on his hands’ said Chaftari whilst sharing his life journey. Chaftari’s transformation came after meeting Initiatives of Change. ‘I had the thought of committing suicide but I remember what IofC said to me – that I had to take responsibility for the atrocities I had caused.’ After the war, in 2000 he wrote a public letter of apology for the things he had committed during the war. Ammacha was a 13 year old homeless boy when he took up arms. ‘I am one of 1000s of children used as victims in war.’ Ammacha described growing up with a cause to fight for; he was a member of the Popular Front for the Liberation of Palestine, ‘the civil war turned a fighter into an ugly monster.’

The audience saw a recently produced short documentary Fighting for Peace by The British Council in Lebanon about their work. The shocking film set the too real context to the stories that our guests told.

We were also joined by two Syrian women, Iman Ghafari, a teacher and counsellor, and Ola Amin, a lecturer in Architectural Engineering at Damascus University. Both are members of Initiatives of Change’s Creators of Peace programme, which aims to develop women’s potential for peace-making. In the midst of the war in Syria, the two women have been courageously using the Peace Circle methodology to build trust between women of different backgrounds in Damascus. ‘I always wanted to learn about peace-making but I never thought I would have to use it. Then my own country went to war,’ commented Ghafari. ‘I had a decision – trigger more hatred or plant seeds of peace. I am faced with this choice every day in Syria.’ Ghafari explained about the ladies work in training women in leadership and peace-building. ‘Whenever I feel lost or desperate, I feel this work fulfilling me with oxygen and fresh breath. Hope is my painkiller.’ 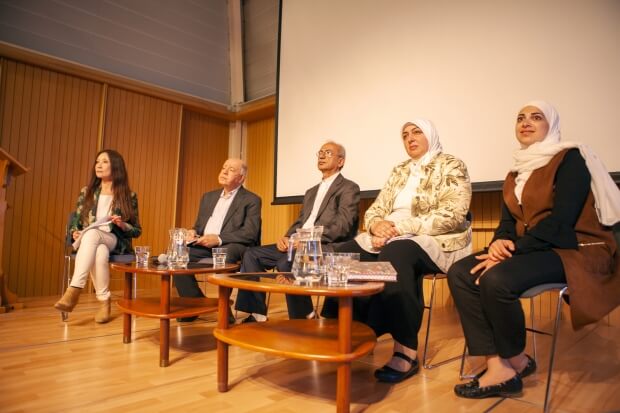 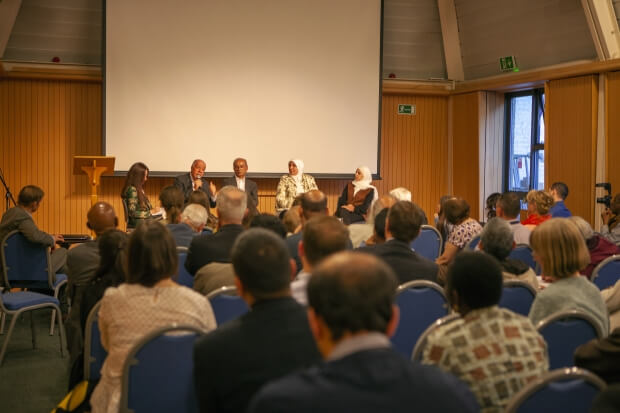 ‘When in a war, we can’t pray for one side, we have to pray for wisdom on both sides,’ said Ghafari.

Amin has recently designed and built a school and a clinic that provides free healthcare for people who have been displaced in Syria. ‘Every Syrian has the responsibility to work for the better of their country.’ Amin has set herself a significant dream and bold target, and she is working towards it – to build a hospital for 300 patients.

Rachel Bird, from partnering organisation The Forgiveness Project, gave a vote of thanks before the evening closed.