Amina Dikedi-Ajaikaye, President of Creators of Peace International, talks to Mary Lean ahead of the President’s Lunch on 5 September.

Soon after Amina Dikedi-Ajaikaye became President of Creators of Peace International in 2017, she travelled to Tanzania to reconnect with an old friend. In 1989, Anna Abdallah Msekwa, then a Cabinet Minister, had expressed a vision of a movement of women committed to creating peace on all levels of society, starting in their own lives. Amina had been one of those who seized on the idea and launched Creators of Peace (CoP) in 1991.

‘I wanted to show Anna what sprang from that small seed,’ Amina says. ‘I showed her a clip of Creators of Peace’s work in Kenya, and she was just screaming with excitement.’

For Amina, getting involved was a ‘no-brainer’. ‘I come from a family of six girls and a boy. I grew up seeing my mother tormented because she did not bring forth sons. But I also grew up with stories of women doing outstanding things in their communities.’ She mentions the 17th century Queen Amina of Zaria, after whom she is named, and her own grandmother, the wife of a village chief. ‘My grandfather never made decisions without consulting her: she was a force in the community.’

From 1994 to 2013, Amina was CoP’s international coordinator, and in 2007 she helped to facilitate the first Creators of Peace Circles in Sudan, South Sudan and the UK. But it was still a shock to be asked to become President of a network which now covers 50 countries.

As a past coordinator of the African network of Initiatives of Change (CoP’s parent body), Amina knew how ‘far from the centre’ local groups can feel. ‘You receive newsletters, you go to the website, but it’s not the same thing as getting a visit, getting a call.’ Her passion for ‘friendship, sisterhood and teamwork’ drove her to say ‘yes’. ‘I want to see the principles and practices of Creators of Peace fully integrated in the lives of the women we work with,’ she says, ‘and for them, in turn, give leadership in their communities.’

In her work in many part of Africa, Amina saw women experiencing the same challenges as she had growing up. ‘I began to see my role as educating men – not in a rude style, bash, bash, bash – but in a rational way. I knew it could work, because I had done it with my father.’

As a young woman, Amina was enraged by the way her father treated her mother: ‘I was a very angry woman!’ When, as a student, she discovered the practice of taking time in silence for ‘inner listening’, she had two ‘clear thoughts’: to see her father’s good side and to care for him. To the astonishment of her siblings, she began to sit and talk with him – discovering that ‘after all, he was a human being’. She also decided never again to speak to him in anger.

In 1989, after some years working overseas with IofC, Amina returned to Nigeria to support her family after her father lost all his money in a financial crash. She set up a dressmaking business with her sister, using all its profits to pay the family’s rent, bills and school fees. ‘For seven years we did not take a salary. It was a huge sacrifice.’

When relations in the family came to a crisis point, Amina remembered her decision, and kept away from her father for two weeks. ‘Eventually when I had calmed down I went to speak with him.’ She challenged the way he blamed her teenage behaviour on her mother. ‘I told him, “No, it came from me, from my pain and frustration. These were the reasons I was the way I was.” At the end, he thanked me. We both broke down. I saw that if you could sit down and reason, a lot would be sorted out.’

During this period she returned to the Christian faith which she had abandoned as a young person. This keeps her going in tough times, she says, together with inner listening. She talks of a ‘sixth sense’, an intuition, which she saw in her mother and other women as she grew up. ‘They would say something to you, and you would say, “How did you know?” I feel it’s an attribute women have.’ She sees it in action in those moments when she decides to ring a friend in a war situation – and talks to her as she hides in a cupboard under the kitchen sink – or when a powerful thought launches Creators of Peace on a new initiative.

Asked about her adventures as a peacemaker, she tells of the time she was applauded as ‘the queen from Nigeria’ at a UN gathering of African queens and princesses, and of the road trip from Nigeria to Cameroon where she was overcome by petrol fumes and had to be rushed to hospital. ‘When I left the clinic,’ she laughs, ‘the other patients said, “That’s the dead body who came in last night!”’

Amina and her husband, Dele, now live in London and, after some inner turmoil, she has become a British citizen. Last year she received an email inviting her to Buckingham Palace on International Women’s Day. When she got there, she started talking to a visitor from Nigeria, who turned out to have been given her name by friends in Nigeria. Just another example of the sixth sense, maybe? 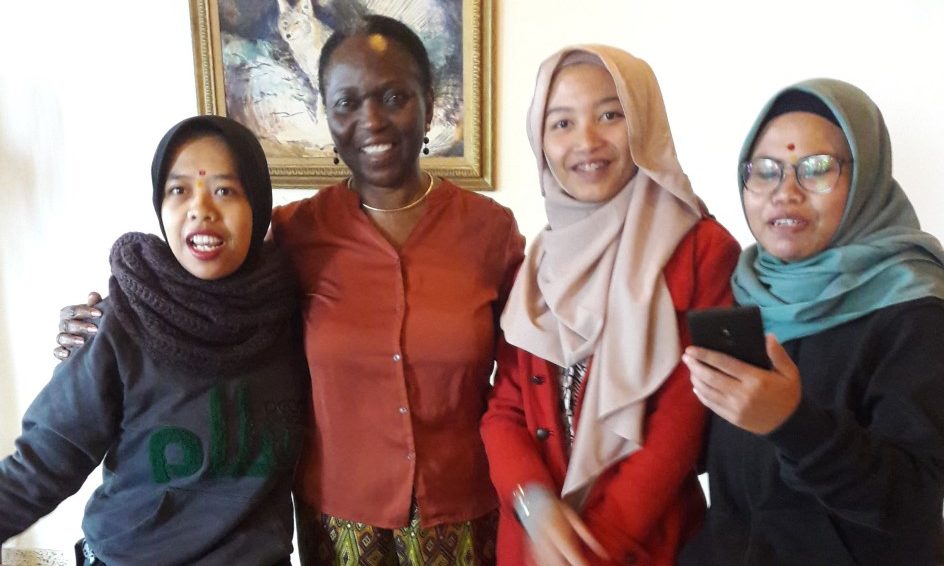