From the 11th to the 15th July 2018 a delegation of people from across the world ascended up the mountain to meet in the breathtaking palace we know as Caux, and were surrounded by glorious weather and magnificent views across Lake Geneva. Amongst the delegates were thirty individuals from our UK team. The team included the three National Coordinators (Roddy Edwards, Talia Smith and Jodie Marshall), the Head of the Sustainable Communities Programme (Amina Khalid) and a wide range of individuals engaging with Initiatives of Change through the Sustainable Communities Programme as well as in other ways. Working closely together with Paul Gutteridge, the National Coordinators and Amina worked hard to invite and accompany politically important figures from both the UK and Somalia to be present with us and share in our conversations and experiences.

As part of the conference, Amina Khalid and David Smart (Chief Superintendent, National Coordinator for Prevent, UK) each took part in a panel to share their own experiences around the work they are doing and how they connected with the conference theme of Violent Extremism and Restorative Justice. We also took the time to meet as a UK team several times throughout the five days to discuss how we can support those working in the communities better and move forward to working towards a better world. The UK delegates represented people working with a wide range of communities from across the UK, including Manchester, Sheffield, Leeds, Nottingham, London and Suffolk. 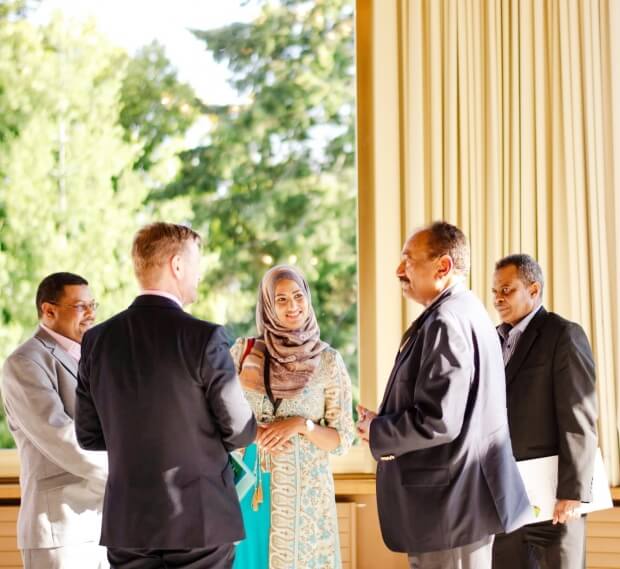 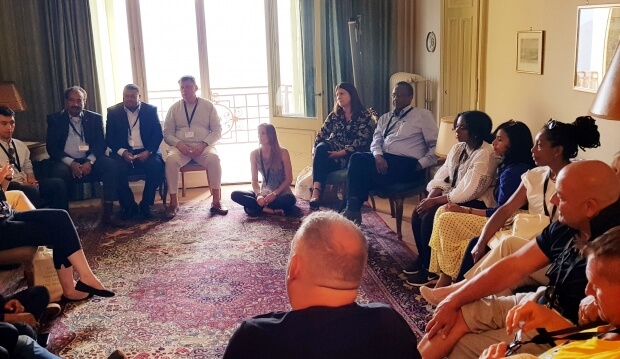 The conference focused on ‘Addressing Violent Extremism and Restorative Justice.’ For us in the UK, the word ‘extremism’ is often loaded with many contradictions, meanings and points of view. It is intertwined with government policies. Views are mixed, hurt has been felt and conversations are hard to have. Caux was full of policy makers, not-for-profit organisations and charities working together, seeking to make a difference in their work from top down decision making as well as bottom up approaches.

The training tracks focused on practical tools and support mechanisms for those doing the work with broken communities affected by the topic, and individuals that could be vulnerable to not only violent extremism, but also other criminal behaviours. The training was divided into two tracks, one of which focused on restorative justice, and the other on self-care. Both are critical when working towards an inclusive peace. The two tracks enabled participants to not only build on the theory of the work they may be doing with communities or governments, but also offered tools to implement in our own lives that support our own well-being and self-care. These trainings also included one led by Louie Gardener (member of the UK network and outreach team and leader of REAL) focusing on transforming conflict within and beyond ourselves.

The five days offered an opportunity to share stories and experiences with those from across the world, many of whom are affected by violent extremism on varying levels. It was humbling to hear about those working in countries such as Pakistan, Lebanon and Syria who have been facing these issues for many years and are often working very much on the front line with those engaging in violent extremism as well as with the communities dramatically impacted by it.

The conference was developed and delivered by a group of Caux Scholar alumni, and the current Caux Scholars supported the running of it as part of their training. It was refreshing and encouraging to have a young team running a conference around such an important subject. They successfully enabled a space for the participants to have some of the most difficult conversations in the plenaries and trainings that we might otherwise avoid. Although there were people of all ages at the conference, it felt empowering to see some of our younger generation standing behind something they believe in and creating opportunities to delve into a topic that is sometimes uncomfortable, but absolutely relevant in our lives today.

For myself, I left the mountain wondering what it would really mean today to offer restorative justice to those engaging in violent extremism and the communities they have left destroyed and hurt across the world. It seemed poignant to have been thinking about such restoration in a place that historically played such an important and critical role after the second world war in rebuilding hope and peace.