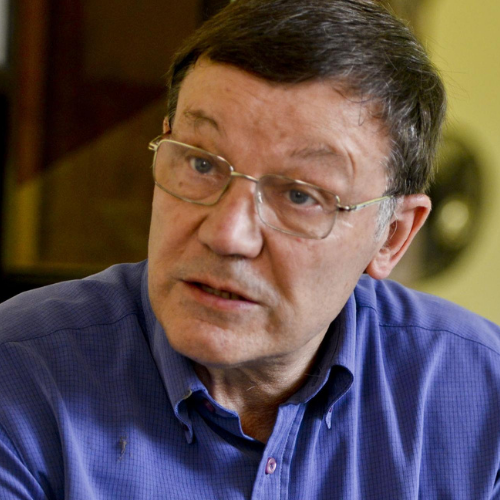 Quakers and Business invited Michael Smith to represent Initiatives of Change during their two-day international online forum on ‘Making Values Visible’. He spoke to the forum of some 40 people on 6 November. His words inspired a lively discussion during the meeting!

I have been associated all my adult life with the global Initiatives of Change movement. Similar to Quaker practice, we encourage people to take time each day for silent reflection, in the context of the great global challenges and the need for growth in character, integrity, and the ‘inner leadership’ of the heart.

Despite the appalling suffering of the COVID-19 pandemic, it has also brought out the best in human nature: a spirit of empathy and care for one another. This has been true in some respects in the world of business as well as public services. It has been so lacking, yet so needed, in recent political discourse. So I want to tell a few stories of business people who are making their values visible through their practices, encouraged by their empathy and silent reflection.

We all know that health workers have put themselves in harm’s way for the sake of others. Bill Drayton, the founder of the global Ashoka social enterprise network, in Washington DC, says that empathy is the number one quality of good business leadership. He said this when I interviewed him for The Guardian a few years ago. And it still applies.

I’ve lived for several years in India and was there again last January, where Routledge, the academic publishers, had just published my new book, Leading with Integrity, in a special Indian edition. It includes some stories from India.

I’m delighted that the Mumbai businessman Vivek Asrani has given me permission to share something of his story. He runs a family enterprise of 100 employees supplying industrial staplers. His company is the market leader for this niche product in India.

Recently a competitor approached Vivek and asked him if he could spare him a supply of a component product in order to avoid going out of business. Vivek might well have been only too pleased to see his competitor collapse. But that is not in his nature and he was happy to help out, and supply the component at cost price. He told me he did so because it was vitally important to save the jobs of his competitor’s employees, to support their families in such difficult times during the pandemic. That is empathy in action.

Vivek says that empathy doesn’t protect you from making tough decisions. He has had to make a fifth of his workforce redundant during the pandemic because of loss of sales. It was a tough choice, he said, letting go 20 people, in order to save the company from going under and everyone losing their jobs.

Vivek is a believer, I am sure he would say, in the Gandhian notion of the Inner Voice. He takes time each morning, first thing, for silent reflection. At one point, prior to the pandemic, his uncle offered to sell him a plot of land outside Mumbai at a knockdown price. Vivek’s inner voice prompted him to accept the offer, though he couldn’t see why. He simply felt he shouldn’t turn down his uncle’s offer. He decided to build a single-story warehouse on the land. Then a pharmaceutical firm, seeing the new construction, asked Vivek if they could rent the building for five years. But they needed a two-story building. Vivek again felt his inner voice encouraging him to accept the pharma company’s offer, even though it meant increasing his investment in the building. Vivek couldn’t possibly have anticipated all this when his uncle first offered to sell him the land. In fact the income from the rental of the new building to the pharma company over the past three years is paying for the cost of Vivek’s investment. His reliance on the inner voice has proved to be justified.

Another Mumbai businessman, whose career I have followed and written about, is Suresh Vazirani. He and his wife Mala are the founding owners of Transasia Biomedicals. It’s India’s leading manufacturer of diagnostic medical technology, including testing for blood diseases. They supply all the leading hospitals in India, and export machines to 100 countries from India.

Vazirani has a reputation for incorruptibility. Early in the development of the company he and his team were building a prototype to export to Germany. In order to do so, he needed to import a vital component. The customs officer wanted a bribe to release the component from the warehouse. Vazirani refused, arguing that the reputation of his company and the reputation of India were at stake. He left the component in the warehouse for three months, risking losing the contract in Germany. In the end, the customs officer relented and Vazirani was able to complete the prototype just in time to ship it to Germany. Such decision-making, in obedience to the inner voice, takes risk-taking and courage.  Vazirani’s company is now in the forefront of combating Covid-19 in India. They have tested more than 10 million people, and are supporting those in India and Bangladesh who are developing medications.

Both these men are Hindu. I also want to tell you about a Yorkshire businessman who prefers to remain anonymous. He is a man of Christian faith and this permeates his approach to his business. He takes time for silent reflection, often whilst out in nature, to ‘get in flow, like a raft carried downstream’, as he puts it. He believes this to be the working of the Holy Spirit. It attunes him to the unexpected during the day. In the last 20 years, seen through what he calls ‘the eye of faith’, he has led the business to new technologies and market sectors, to a revived sense of purpose, and very often, he says, to conversations with particular people.

One day, he was about to chair an important board meeting when a somewhat garrulous employee approached him, asking for a private word. His immediate reaction was not now, it wasn’t convenient. But somehow the spirit of being in flow prompted him to stop and take time with the employee. This man said that his twin brother, himself a former employee in the business, was dying. The business leader was glad that he had stopped to talk with his employee, and arrived, nonetheless, exactly on time for the board meeting. During the meeting, news came through that the man’s brother had in fact died. The business leader had the thought to make sure that the brother had heard this news and took time out from the board meeting to check. He broke the news himself to the brother. ‘What really was the greater priority?’ the business leader commented afterwards. ‘My ‘important’ board meeting? Or care for the employee?’

The businesswoman, author and executive coach Genevieve Boast, founder of Beyond Human Stories, tells how she had to whistleblow on theft in the company where she worked in Sheffield in her early 20s. The company supplied set top boxes to a world renowned satellite broadcasting company. She was in charge of stock control. But she found that supplies were going missing and the broadcaster was being invoiced for equipment they were not receiving. She reported this to the management of the supplying company but they dismissed her concern. She realised to her horror that they were all involved in the theft. She decided to report it to their customer, knowing that the balloon would go up and she would likely lose her job. After three days of struggling with this decision, she locked herself in a computer room and phoned the customer. Her contact there was astonished and thanked her. Her role at the Sheffield supplier became intolerable and she knew she had to leave. She phoned the client again to say so. ‘Don’t go away, Gen,’ said her contact at the broadcasting company. ‘I’ll call you back.’ Half an hour later he called to say that he was so impressed by her honesty that they wanted her to come across to them. They would create a new role for her as Stock Integrity Manager. The story didn’t end there. The two of them fell in love and are now happily married. It’s not every whistleblower that has such a happy outcome.

The emphasis on silent reflection is not just confined to small or medium sized enterprises. The big hi-tech corporations in Silicon Valley also provide space for meditation for their employees, as I spell out in a chapter in my book, headlined ‘Time for Self-Refection’. And no doubt, many thousands of business leaders are inspired by an intuition as to what is the right thing to do.

Just one more thought about silent reflection. We of Initiatives of Change suggest that the best time to do this is first thing in the morning before the rush of the day. At the mundane level, it is a way of getting on top of the day before the day gets on top of us. As the saying goes, musicians tune their instruments before the concert begins, not after the concert is over! It is a chance to think and pray for others—family, friends, work colleagues, the situation in the business and in the wider world. I also read a spiritual text. We jot down any thoughts, mundane or unexpected, in a notebook, so as to be able to refer back to them during the day. I call it ‘active listening’. It is important to have unhurried time for silent reflection. I might use the time to check the news headlines and weather report online, so long as these don’t crowd out unhurried time for inspiration at the more profound level.

If we are going to rebuild a spirt of integrity which builds trust in business and the economy, following this time of lockdown, then these times of silent reflection are vitally important components of one’s life. They unlock the potential in all of us to make values visible and to contribute towards a better world.

(Learn more about Quakers and Business Group and the ‘Making Values Visible’ conference on their website.)