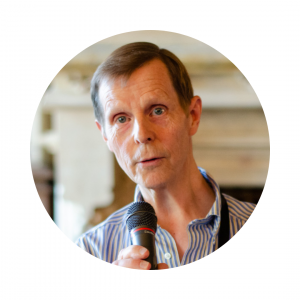 Peter Riddell, Convenor of IofC UK’s Agenda for Reconciliation programme, has successfully piloted an online course that uses IofC documentaries to equip those who are interested in pursuing peacemaking in their home country.

Over the last few years, I have been using Initiatives of Change (IofC) films to introduce people to IofC UK’s Agenda for Reconciliation programme. IofC has a long tradition of using film, plays, and other artistic productions to help people reassess their lives and priorities. Five particular films seemed to fit together with focuses on outstanding peacemakers in situations of international, religious, ethnic and post-colonial conflict.

The idea of creating educational modules formed, consisting of an introduction, a viewing, and then a group analysis of what the peacemakers said and did, and why. Then finally, time to discern what qualities they displayed that could help us in our own peacemaking. Thus the title, Qualities and Strategies of Peacemakers (QSP).

When many countries entered into lockdown last spring, I realised that the sheer number people with time on their hands was a great opportunity to try something new. So, I introduced the modules online as five 90-minute daily sessions, Monday to Friday. Suddenly, I was interacting with people in far-off places – sometimes in desperate situations – who couldn’t wait to learn more about peacemaking. It was a great gift to have Dr Omnia Marzouk, former President of IofC International, join me as co-facilitator.

The effect on people’s lives has been powerful. A Malaysian who found the strength to ask others for forgiveness. A young Lebanese who said she had been ‘on the verge of giving up every hope of a brighter future’ for her country. A Philippino and an Indonesian who began an online Muslim-Christian dialogue, starting with ‘The Imam and the Pastor’ film. Academics at the the International University of Sarajevo who asked to use the material in their courses and requests have been made to have the films subtitled in local languages – already completed in English, Arabic, French and Korean.

It quickly became apparent that the participants in the courses bonded quite deeply and needed follow-up. So, we instituted monthly ‘QSP-live’ online opportunities for alumni to engage with experienced peacemakers such as Imam Muhammad Ashafa and Pastor James Wuye from Nigeria, Rob Corcoran from Hope in the Cities in the USA, and Angela Starovoytova from Ukraine.

Now, after 11 courses, 68 people have completed the whole course, with a total of 117 participating in at least one module, and 428 individual viewings of the films. And this is without counting the over 60 IofC outreach workers in the Asia-Pacific region who completed one of four QSP Training of Facilitators courses.

I can’t end without paying a tribute to the filmmakers, in particular David Channer, Alan Channer and Imad Karam, who have captured the peacemakers’ stories with supreme artistry. It is deeply satisfying to give people the opportunity to discover the riches of these films. It is like giving a precious gift to each one.