“Is there an inclusive narrative, a story of our Shared Humanity, which can bring us together as human beings, beyond all our attachments of nationality, religion, language and culture? While maintaining the riches of our own identity groups is it even realistic to think there is an embracing vision we can all buy into? Or are we destined to largely engage in a multitude of ‘them and us’ agendas?”

This was the underlying theme that was explored during 26 events in three universities, six school Sixth Forms, a variety of other public events and more private occasions, by Letlapa Mphahlele and Howard Grace during the month of October 2019 in many locations around England. Fifteen towns and cities were visited: Oxford, Faringdon, Reading, Thatcham, Coventry, Birmingham, Sheffield, Nottingham, Middlesbrough, Newcastle, Carlisle, Liverpool, Bournemouth and London. Based from Howard and his wife Maria’s home in Newbury, we travelled about 1,600 miles in total. 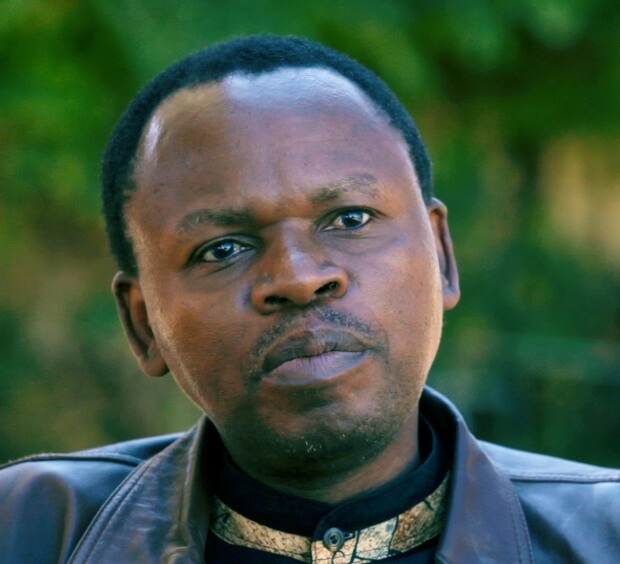 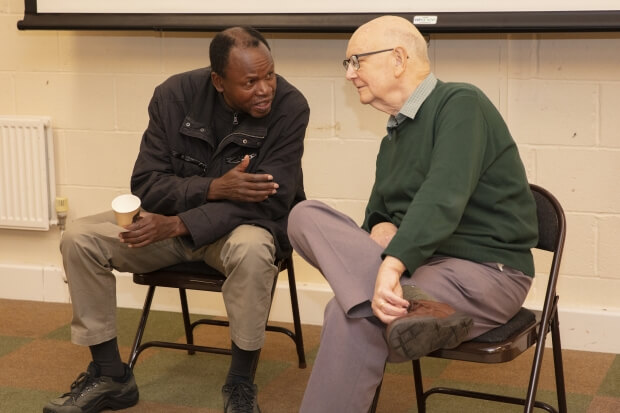 We have a unique opportunity to meet and discuss with Letlapa Mphahlele, former commander of a South African liberation army during apartheid times. His passion was such that he ordered high profile retaliatory massacres on white civilians. But after a radical transformation he now sees the whole of humanity as ‘My People’. Letlapa is the main protagonist in the award-winning film ‘Beyond Forgiving’, and was formerly an opposition Member of the South African Parliament. He is on a brief visit to the UK, invited primarily by ‘Initiatives of Change, International’. 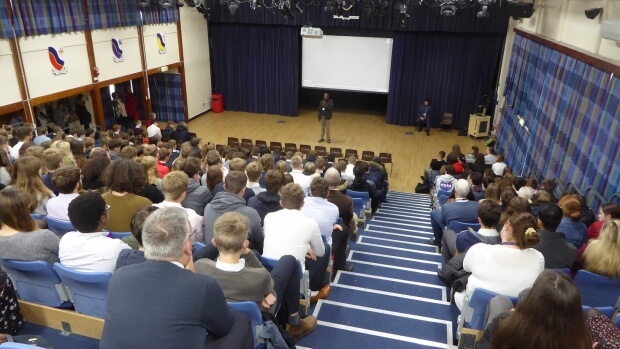 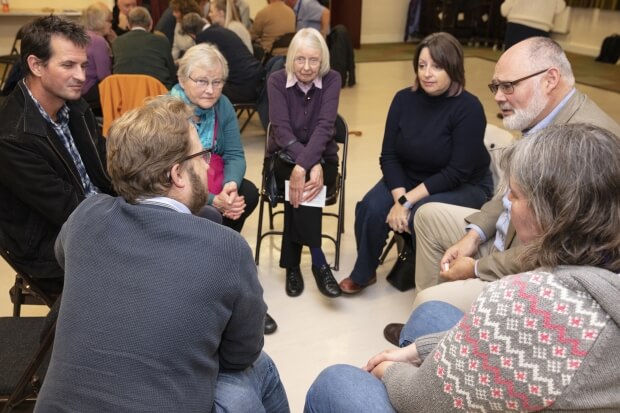 Events started with setting the scene about why Letlapa had left for school in his rural African village one morning, aged seventeen, but instead of going to school went over the border to the neighbouring country of Botswana and joined the liberation struggle. Sixth Form students could well identify with the challenge facing someone of their own age, in an oppressive setting. This was not an academic exercise!

But sessions also often included group discussions, with issues and questions like: “Imad Karam, Palestinian director of Beyond Forgiving says, ‘The Israelis, and we Palestinians, are both trapped in our own narratives.’ This is often true of many situations in the world, including on the family relationship level, such as between some husbands and wives, who are of the same nationality, language and religion, yet are in deep conflict. What steps can be taken to move beyond this entrapment?”

It was felt important to live into each other’s narratives. Letlapa, and Ginn Fourie, the mother of Lyndi, a young woman who had been killed in a massacre which Letlapa had ordered, had done this. Ginn had lost her only daughter in this way, and Letlapa had experienced growing up as a young black South African during the apartheid era. Both lived into the deep pain that the other had experienced. Audiences could identify with their having shared each other’s humanity. 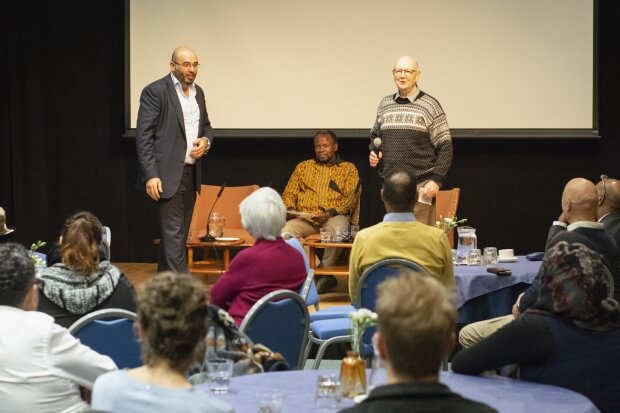 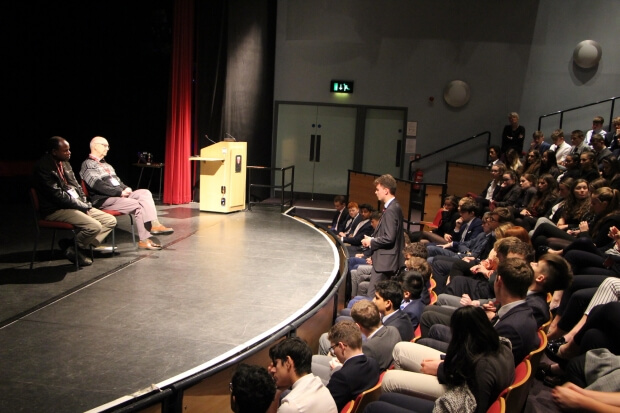 Exploring more deeply, I often asked audiences, including in schools, what they really felt about Ginn forgiving Letlapa for the orders that led to the death of her daughter. Also, why did they think she forgave? A frequent response was that if she had lived her life with that bitterness she would suffer more than Letlapa.

Nelson Mandela was sometimes quoted. He had said, “Resentment is like drinking poison and then hoping it will kill your enemies.” Yet others felt that there are no straightforward answers about the rightness of forgiving. We each need to follow our own path. Some are ready to forgive, others are in a different place on life’s journey. Ginn actually forgave Letlapa nine years after Lyndi was killed. She had told him that had she met him sooner after that tragedy she could have killed him with her bare hands. One person said, “When it is ripe, the apple falls from the tree.”

Letlapa was often asked how he had experienced being forgiven. He replied that when Ginn gave him that gift, it touched something deep inside and restored his humanity. He recognised this as a spiritual experience, though not a religious one, as he is an atheist. He also talked about a time when he had been physically released from prison. This had not given a feeling of liberation in his spirit. Yet when Ginn forgave him it prompted a great release from his internal prison.

In Nottingham, we were hosted by Dr. Musharraf Hussain. He has recently translated the Quran into modern day English. There has been much support for this, also vitriolic opposition. It was helpful for us to live into the experience of animosity experienced by such a warm- hearted and well-motivated friend. We were both presented with signed copies of this Quran, and were interviewed for an hour on Radio Dawn, the radio station initiated by Dr. Musharraf. 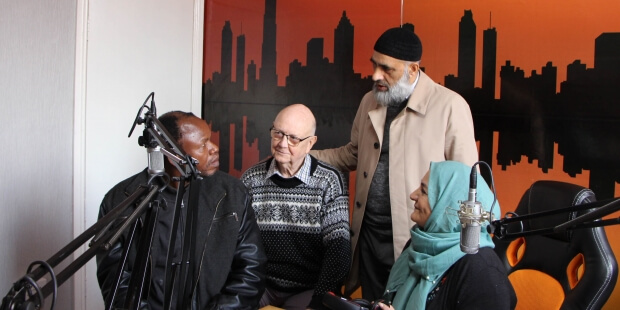 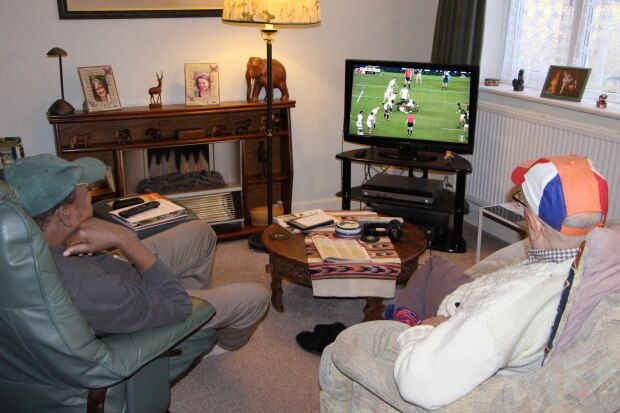 Warming up for victory at Anfield 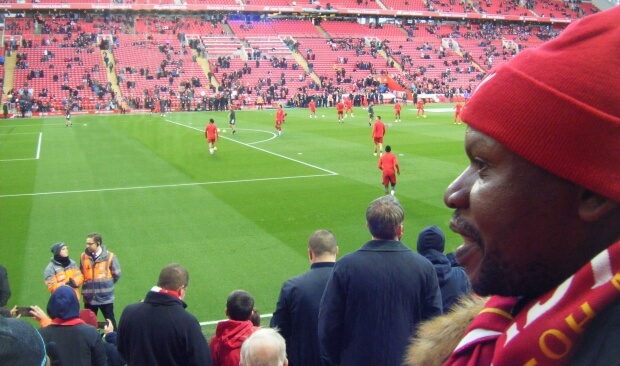 There were many other events and encounters with friends which there is no room to do justice to in these two pages. But, just to say that as well as the (often profound) discussions and engagements we had there were times of relaxation. Letlapa, an ardent Liverpool football supporter was presented with a ticket for his team’s game against Tottenham Hotspur. A memorable experience. But this too, gave cause for reflection on ‘shared humanity’ amongst opposing teams.

Also, South Africa won the rugby World Cup against England the day before Letlapa left for home. We watched this together on TV. Because of the history of the Springbok rugby team, a symbol of white dominance, Letlapa is left with the (un)conscious bias in his heart against the concept of the Springbok team. Yet his head tells him he should be supporting the South African team. So, he sometimes wears a Springbok shirt and cap to try to get head and heart in the same place. He talks about this endeavour openly.

We made clear that we are in search mode and still struggle with our own human nature. The purpose of this venture was not about joining any organisation, but to encourage everybody to nurture a more inclusive spirit in their own lives, and also in groups they are already involved with.

This is not a utopian blueprint from which all the world’s problems will be solved. But most of those we encountered felt that the current ‘them and us’ spirit of confrontation is not a good foundation to pass on to the younger generation. An inclusive vision of Shared Humanity is a much more effective spirit to foster and build on for the future.

Thank you Letlapa for your depth of honesty in enabling us to explore this vision.