Sowing seeds of hope through intergenerational dialogue between refugees, migrants and host communities 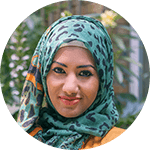 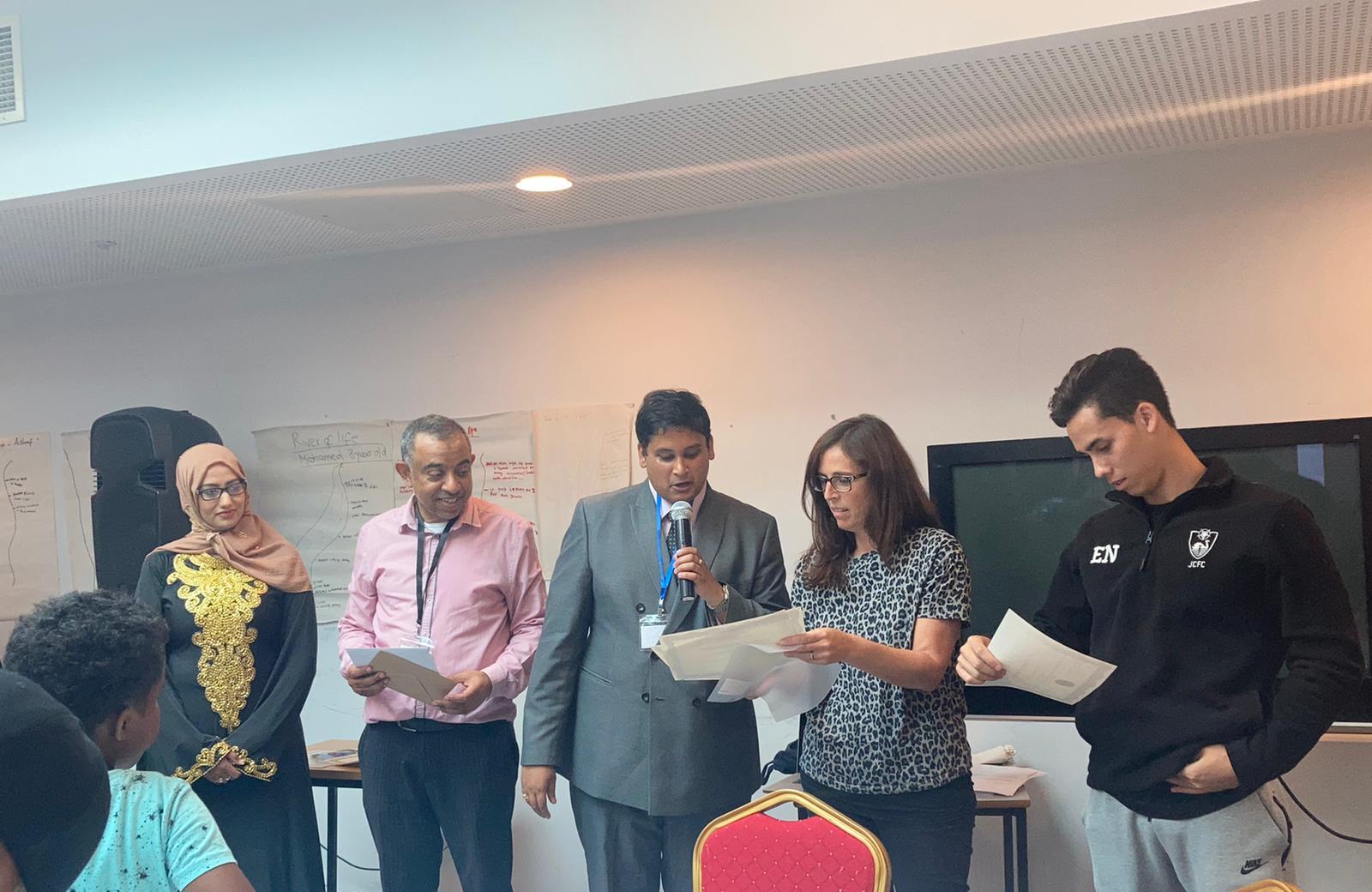 With the current situation in Afghanistan, migrant and refugee rights continue to dominate the political agenda causing an unfounded fear, populist rhetoric and division in many parts of our communities.

In light of these challenging times, Initiatives of Change UK’s Sustainable Communities Programme organised an inspiring and timely four-day training entitled: Intergenerational dialogue for social cohesion with Migrant and Refugees in Europe at the end of August. The project is in partnership with the Spanish NGO, Foro Abraham, supported by the International Dialogue Centre (KAICIID) – Network for Dialogue and hosted by the Somali  Welfare Association (SBWA).

Over twenty participants from different generations, backgrounds, and communities gathered together to engage in dialogue and to meet local councillors, religious leaders and heads of civil society organisations.

Participants from Afghanistan, Yemen, Somalia, Bangladesh, Indonesia, Nigeria, Egypt and Scotland joined a series of training sessions covering a wide-range of topical issues of local, national and global significance. Topics ranged from ‘Migration and Media’ to looking at ‘Europe’s Migration Challenge – from Integration to Inclusion’ as well as ‘Building Back Better Together – Interreligious and Intercultural dialogue and ‘Inspiring Change Across the Generations’.

The overall aim of the training was to build relationships across generations through dialogue, creativity and music, forge cohesion between migrants and host communities and strengthen relations across religious, political and ideological divides.

Amina Khalid, Head of Sustainable Communities Programme, said in her welcoming remarks: “With so much conflict and disunity in the world, we must double our efforts to work together towards a common humanity. Being a witness to war and conflict first-hand, I have come to understand the importance of building bridges with those who do not share the same value as myself. Let us open our hearts to each other as we spend the next four days together.”

Tauhid Pasha, acting Chief of Mission for International Office for Migration (IOM), opened the first session with a compelling and profound presentation on the invaluable contribution migrants and refugees make to host communities. In light of the current situation in Afghanistan, he particularly emphasised the important role of governments and media in messaging, reporting trends and framing migration discourse. He said: “Humanising each story is key” and told the groups about ‘Migrants as Messengers’, IOM’s latest campaign. He added ”It is very important that communities connect together with each other and to ensure there is dialogue and experiences shared. What really came out of today was the commonalities that these communities share with each other”.

His contribution was followed by Jimmy, an activist and musician from Manchester and Sheffield, who shared his story of internal migration and displacement. “Though I am a white British man born and bred in England, there were many moments where I felt an ‘outsider’ in my own country”.

Jimmy‘s deep personal journey helped participants to understand an angle of migration that is often unspoken about. This created a greater empathy and understanding towards the ‘other’ and reasons for the existing fear and division in our society.

When asked how can we build trust between different communities, Jimmy’s response echoed that of IofC’s ethos: “To change the world we must change ourselves first. Learn to see through and beyond all or any agendas – that’s the IofC principle, which has helped me to do the personal inner work”.

The day closed with two personal songs written by Jimmy: “Let Love Be Thy Guide“ and “When the Water is Safer than the Land“ inspired by the plight of refugees.

Rabbi Nattan Levy, Head of Operations of Faith Forums for London, and Ali Madani, Head of Operations for Strengthening Faith Institution, led an inspiring session on the importance of interreligious and intercultural dialogue. They also shared with the group the power of faith actors working together in deepening cross-faith understanding and relationships.

“I never knew the importance of interfaith relations until our previous centre Al-Rahman Islamic Centre was burned down by far right extremists. It was the Jewish and other faith institutions that came to help when we needed the most,‘ said Abubakar Ali, Chair of the Somali Bravanese Welfare Association.

Peter Riddell, the Convenor of IofC UK‘s Agenda for Reconciliation programme, led an inspiring and reflective discussion on the award winning film The Iman and The Pastor.

The last two days of the training was focused on unlocking the blockages of participation to integration and inclusion and discussing how to inspire change across generations. In an earlier session, one participant from the older generation asked: “how can you integrate and feel included into a community that doesn’t accept and respect you?” Another participant said “we are sometimes treated like a second class citizen with the media playing a big part.”

Journalist and film maker, Phil Cox who has worked with BBC, Channel 4 and Netflix, offered an alternative solution through his training on ‘Our stories of Change in Modern Media’. He trained participants on the power of storytelling and how to tell the story in a compelling way. Nine-year-old Mudasir from Afghanistan shared with the group his family’s journey to the UK through an earlier exercise called ‘The River of Life’.  He said: “Life in Afghanistan is very stressful because of the war but I learnt today that if you are helping each other you can be better.” His story reminded everyone on the importance of solidarity and listening to each other’s story with compassion and care.

Local politicians representing Finchley such as Cllr Anne Clarke who is also the London Assembly Member for Camden and Barnet, Leader of the Labour Party in Barnet Barry Rawlings, Cllr Sara Conway representing the Jewish community and Cllr Arjun Mittra all joined in a highly interactive end of training dialogue sessions with participants as they presented some of the key issues facing their communities. One of the younger participants asked Cllr Barry: “Did racism exist in the past and what lesson can we learn?” A jaw dropping moment was when ten-year-old Maryam from Malaysia/Egypt, asked: “How can we remove hate and fear from our communities?”

Participants along with the local councillors drew together a comprehensive personal and collective action plan going forward. On an individual level many pledged to make a conscious effort to reach out to other communities and doing their part towards creating an inclusive community. Collectively, councillor members pledged in continuing and doubling their efforts to engage grassroots through such dialogues.

Both participants and local MP’S said that it was the first time they have seen different communities across the generation, cultures and faith coming together.

There was an air of genuine hope and commitment from both generations to work together. Cllr Arjun Mittra, said: ”The most important question and valuable for me that came up today was ‘how should we as members of the public engage with politicians like me.’” He also added: “Another person said ‘no parent puts their child in a boat unless the water is safer than the land.’ Barnet council will, I hope, be discussing the issues of refugees very shortly and I will bare that quote in mind when we have that debate – it is hugely important.”

Sumsun, a University lecturer originally from Bangladesh, said: ”This is the first time in 8 years since living in East Finchley that I saw Councillors and mixed communities coming together.” Another participant from Malaysia concluded: “I have been inspired greatly by the pain, experience and wisdom of everyone. I am excited for future events and will be more proactive in my community.” 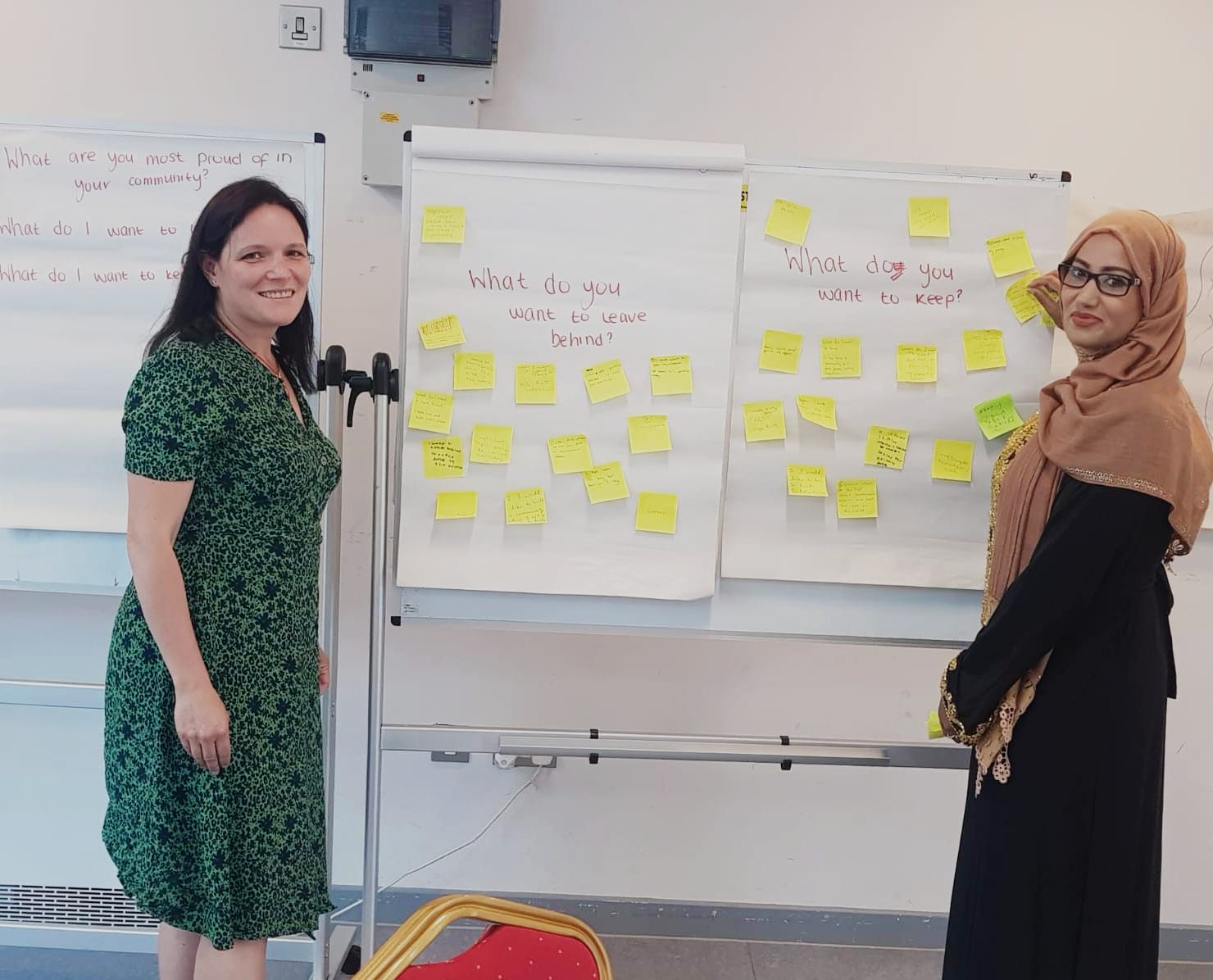 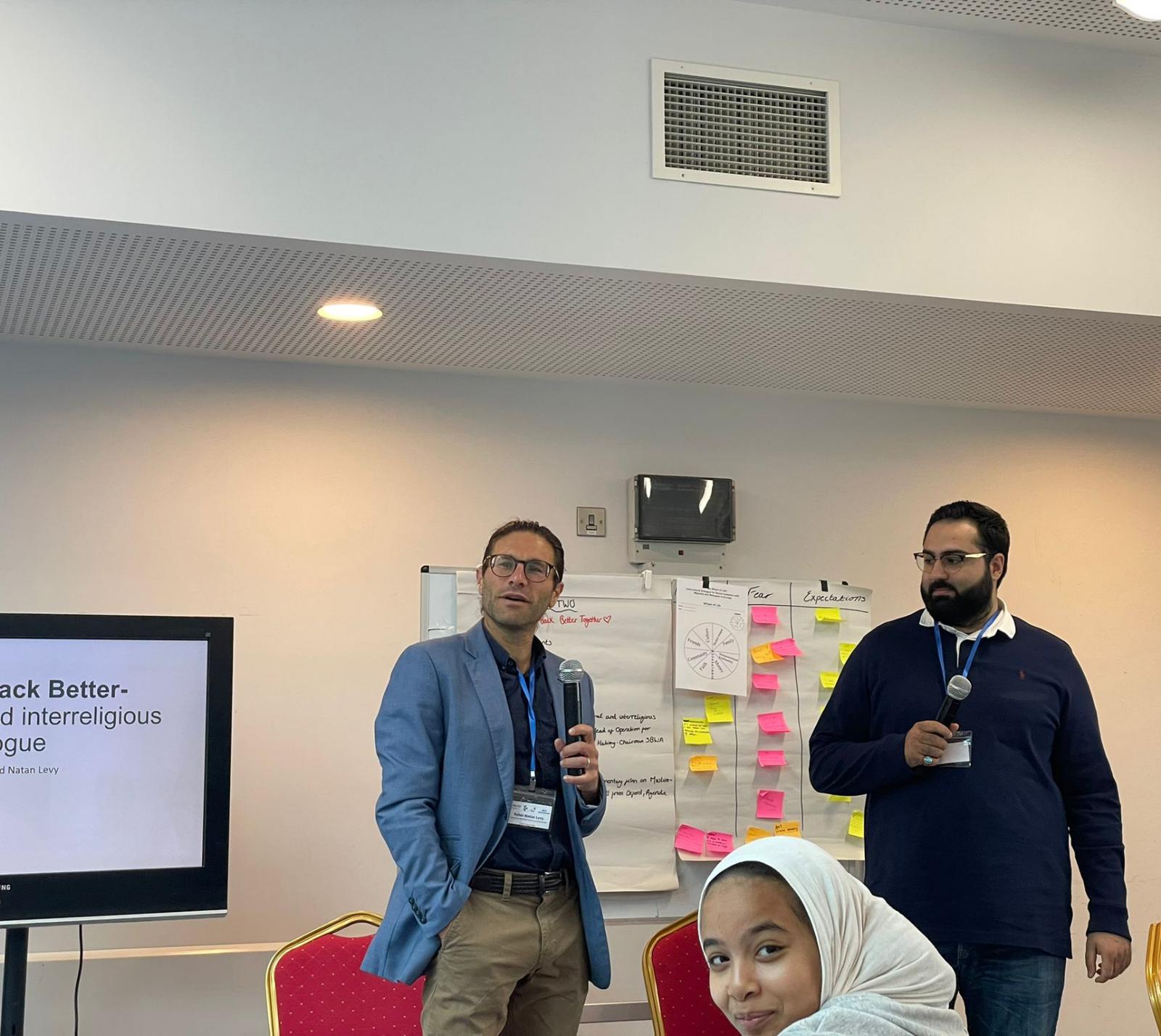 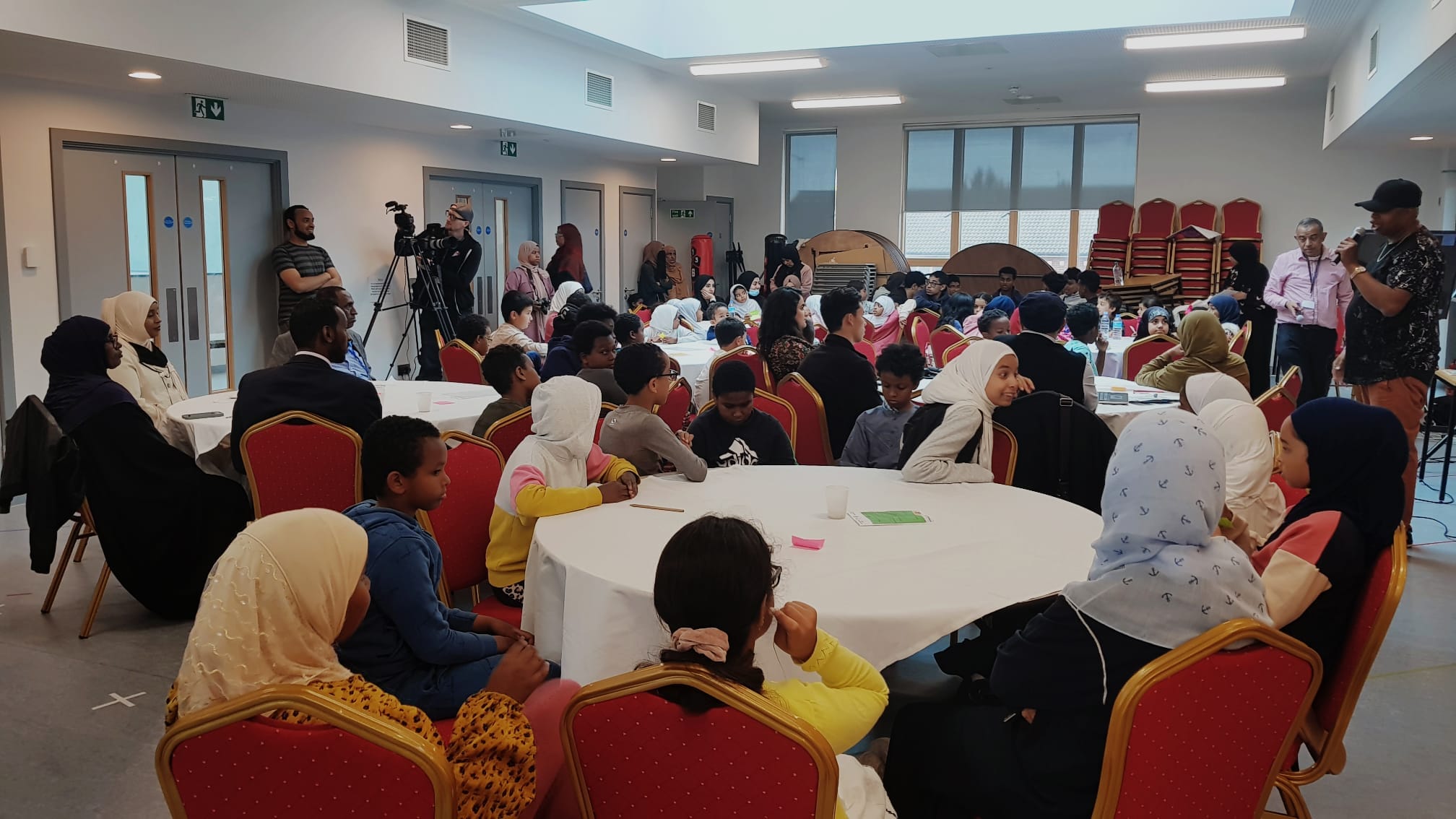 Celebrating the end of the training with family and friends 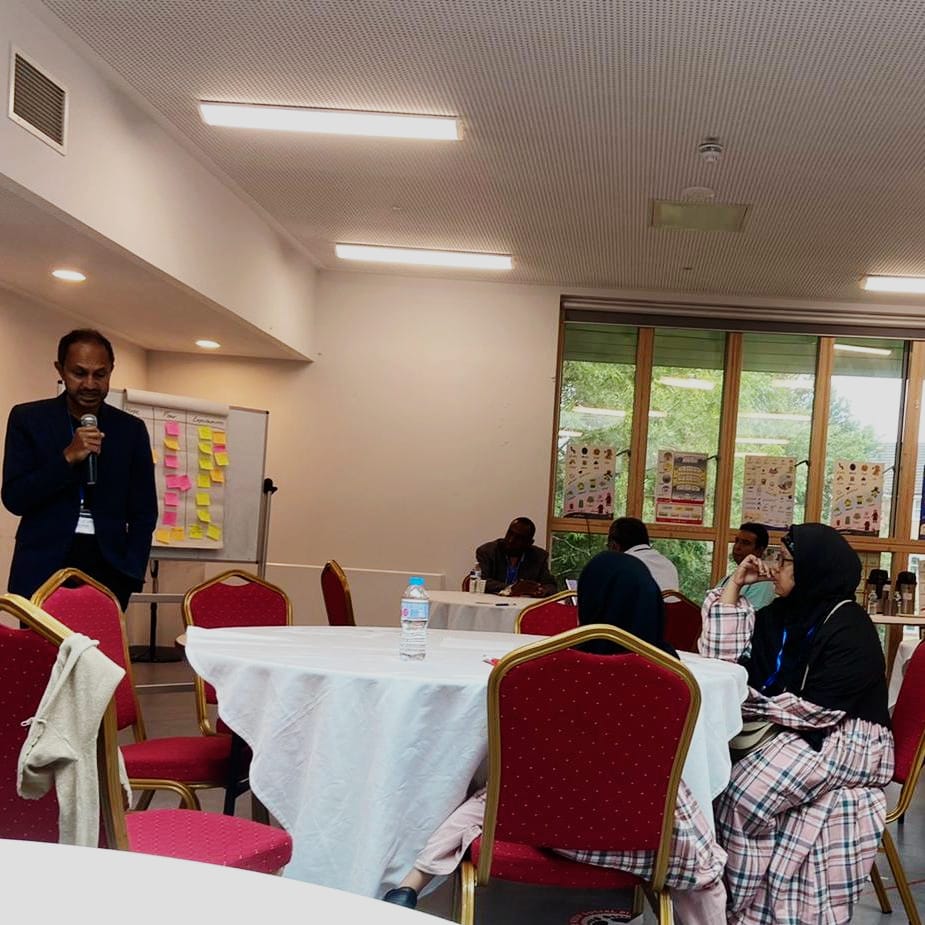 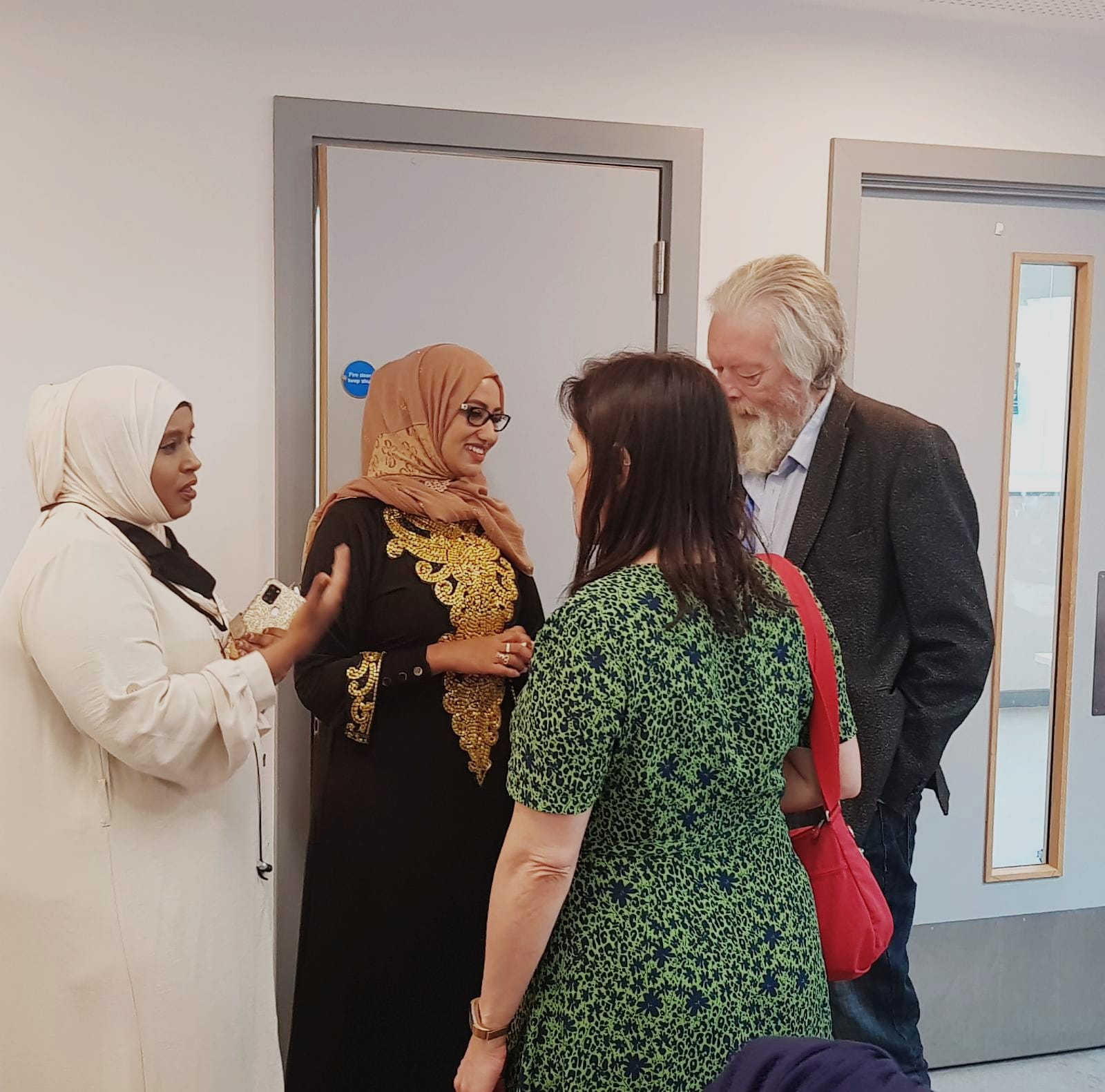 Cllr Ann Clark, Assembly Member of Barnet and Camden, Barry Rawlings Leader of the Labour Party in Barnet, Amina Khalid and one of the participants in dialogue. 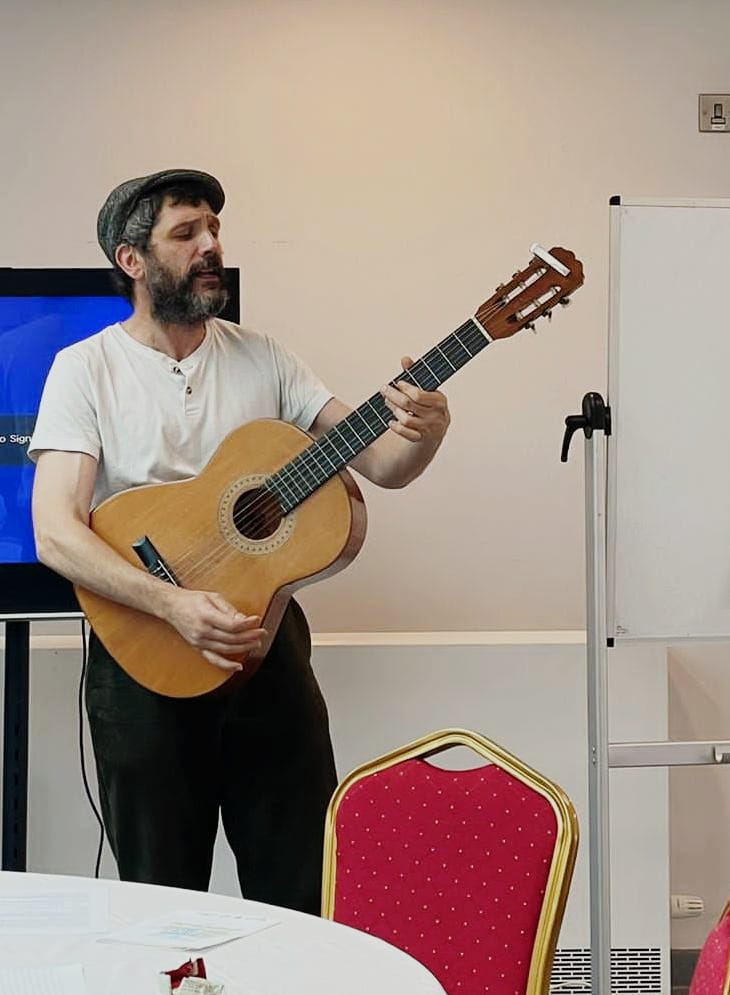