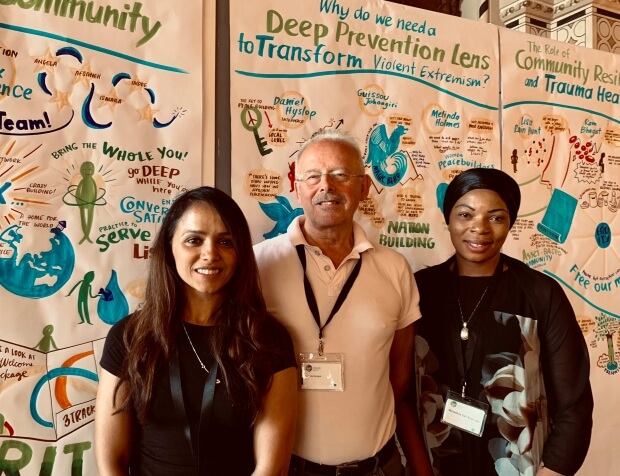 At the ‘Towards an Inclusive Peace’ conference which took place from 8 to 12 July 2019 as part of the Caux Forum, a delegation of experts and community activists debated the issues on youth violence and the rising knife crime in the UK. The panel included: Ian Monteague, Chair of Glasgow’s Family Action (FARE) in Rogerfield and Easterhouse; Cllr Michelline Safi Ngongo, a Labour Islington Councillor; Sakira Suzia, Metropolitan Police Officer and Paul Gutteridge, National Director of Initiatives of Change UK.

The seminar was organised by IofC UK’s Sustainable Communities programme headed by Amina Khalid. Participants and panelists considered the key elements of a common action plan drawing on Glasgow’s model and dramatic success in combating youth violence after being branded European murder capital in 2005.

Ian Monteague observed it was ‘community action’ where police worked closely with professionals in the health, education and social work sectors that resulted in the dramatic drop in stabbings. While violence has always been present, the ‘world does not have to accept it as an inevitable part of the human condition,’ he said. The factors that contribute to violent responses – whether they are factors of attitude and behaviour or related to larger social, economic, political and cultural conditions – can be changed. He urged London to ‘pick up the messages’ and learn the lessons by ‘treating victims as human beings and not just as statistics’.

Labour Councillor for Islington, Michelline Safi Ngongo, highlighted that the murder rate in London is at its highest point in decades and possibly higher with unknown numbers of ‘victims treating their own wounds’. Although London was not the worst place for killings, according to BBC reporting, two London boroughs were named in the top 10: Islington and Newham. She highlighted that the surge in knife crime has been driven by several factors, including rivalries between drug gangs, cuts to youth services and provocations on social media.

Sakira Suzia, working with gang members as part of Islington’s Youth Offending Team, was emphatic ‘we all have a responsibility to help each other’ and ‘we can no longer be bystanders’. She shared her personal story and why she joined the Metropolitan Police. She works with youth offenders and sets up various schemes, where young people can learn a skill, such as boxing or martial arts to combat anger, to stay away from courts and prison. She talked about some of the reasons or influences as to why youth attracted to knife crime.

Paul Gutteridge, drawing the session to a close highlighted that a great change occurs when the perspective shifts from a criminal approach to a ‘public health approach’ and see the person as an individual. He concluded there is much work to be done in follow-up action on youth violence and working towards inclusive peace.

For more information on the Towards Inclusive Peace conference or the Caux Forum please visit: iofc.ch

Report and photos by Yee-Liu Williams