A long way from home

Yee-Liu Williams meets Shabibi Shah, whose books are ‘a simple cry’ for the world’s refugees.

Shabibi Shah’s voice trembles as she describes ‘the most terrible journey you can imagine’, her 15-day escape across the Khyber Pass from Afghanistan to Pakistan in 1982. She struggled barefoot through rain and mud and crawled across rocks and boulders. ‘I thought the sky was crying too for this fugitive woman with her three young children who had come to find a new country for ourselves. I will never forget my beautiful homeland.’

Shabibi knows only too well what today’s refugees are going through. Her memoir, Where do I belong, tells a story of resilience and resolution. Her husband, Zafar, worked as a political journalist in Kabul.

Under the Soviet-backed communist regime, freedom of speech was not allowed. ‘Suddenly it felt as though every word we uttered risked being heard by a spy. We didn’t even feel able to talk freely in our own homes.’

Unable to tolerate the repressive regime, Zafar continued to write and secretly distributed his work. He suffered a mental breakdown, spent eight months in prison while Shabibi fought for his freedom, and after his release finally escaped to Pakistan, leaving the family to follow him. Even when they were reunited in Pakistan, they did not feel safe. ‘All Afghan women were watched by the Mujahideen, who had full control of us. We had to be very cautious.’ They were desperate to find the security and freedom that is taken for granted in Europe.

‘Miraculously’, a stranger arrived from England to help them. Joseph Glassburg, a Jew whose parents had escaped from Nazi Germany when he was a baby, had heard about Zafar’s plight from mutual friends in America. ‘How could it be that in this materialistic world, a stranger would go to all this trouble and expense to travel to Pakistan to help a family of Muslims he did not even know?’ asks Shabibi. ‘Had not the people of our two religions been enemies for centuries?’ Joseph arranged for the necessary documentation for the family to come to Britain.

Further tragedy struck in July 1992, when a gang of English youths murdered Zafar’s nephew, Ruhullah, in South London. He was 24 years old, gentle and peace-loving, with plans to become a doctor. Shabibi talks of the inconsolable grief and senseless futility that her family suffered: ‘Perhaps it was his destiny that dragged him all the way from our war-torn country to lie in a pool of blood and die on the streets of a civilised one.’ In September 1993, Zafar died after seven months in hospital, following a stroke. His death created ‘such an awful feeling of hopelessness that I thought my heart would burst’.

She embarked on her memoir as ‘therapy’, never expecting to publish it. She hopes her writing can help people understand what it means to live in exile. ‘My book is a simple cry for myself and my people who died, suffered, lost their children, became disabled, were widowed and became refugees.’ She says that her strongest motivation for learning English was that she ‘wanted to help other refugees like myself’. She is now chair of the Afghan community organisation, Paiwand, which supports the Afghan diaspora in the UK.

Shabibi’s recently published novel, Innocent Deception, tells the story of Afghan refugees, including a boy who arrives in the UK as an ‘unaccompanied minor’. She has fostered four such children, one after the other. ‘All boys who come this way have no papers,’ she says. ‘Most of them do not know their date of birth. In Afghanistan parents cannot record their birth date, they are either illiterate or struggling to survive.’ 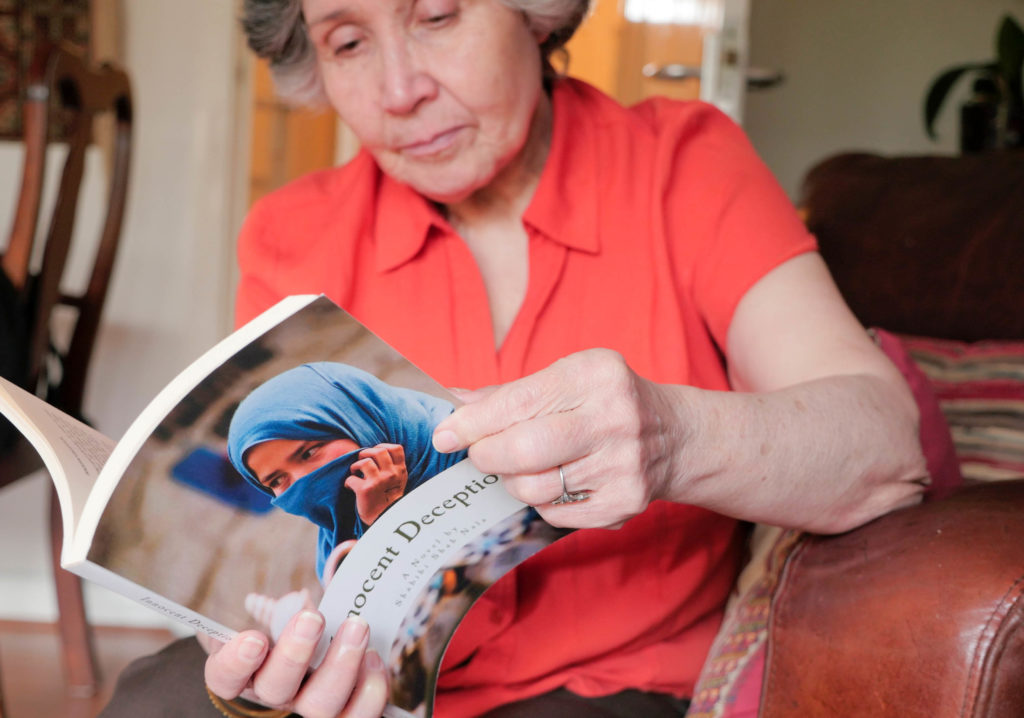 She feels the plight of today’s refugees deeply. After a visit to the Jungle in Calais, she wrote, ‘I don’t know why they call this place “the Jungle”. I thought animals lived in a jungle. Those displaced, dispossessed, traumatised faces did not belong to animals but to decent human beings who have been robbed by powerful corrupt politicians in their own countries and neglected by the world. They didn’t choose to live in these conditions.’

She could not help crying for the children and teenagers she met in Calais. One young man saw her distress and hugged her, ‘Mother, mother, don’t cry, God will help us somehow one day,’ he said.

‘He was trying to comfort me,’ says Shabibi.