Jens Wilhelmsen talks to Francis Evans about his experiences of post-war Europe.

Asked about the parallels between Europe today and in the post-war years, Jens Wilhelmsen summarises them in a single word: disillusionment. It’s an unexpected reaction. Surely there was hope then for peace and a better future?

‘I was 18 when the war ended and just leaving school’, he explains. ‘I had volunteered for the resistance against the German occupation and of course, the days of liberation were marvellous, intoxicating. We could fly our flag again!

‘During the war, we had a clear purpose. I thought once we had got rid of the Germans, we would work together as a nation to rebuild the country and secure peace. Freedom would be the beginning of an adventure.’

Instead, Jens describes how vested interests and political wrangling quickly eroded the feeling of national solidarity. Now at university, he felt listless and depressed. The spectre of the cold war loomed on the horizon and the atom bomb was a warning that the next war would be worse. ‘I was left feeling that our struggle had been in vain’, he recalls.

Resolution came unexpectedly, through what he describes as a ‘spectacular’ offer from two of his uncles. They offered his fare and accommodation to a conference in Switzerland, in the alpine village of Caux. People from all over the world would be there. ‘After five years of isolation, this offer was too good to reject,’ says Jens. That decision was to change the course of his life.

‘The people I met there gave me the tools to come out of my disillusionment. I was struck by a simple point: if you want to have a better world, you have to start with yourself. I knew long before I came to Caux that there was a gap between my ideals and my way of living. Here I heard about standards of integrity: honesty, unselfishness, love and purity. Those standards helped me put a name to these gaps in my life and decide to do something about them.’

One of these gaps was bitterness towards Germany, a resentment that he struggled to overcome. Then in 1948, German leaders who had been to Caux invited an international group to come and help give new hope to their people. Jens was one of those invited.

‘I think it was the most difficult decision I’ve ever made’, he recalls. ‘I did not want to go to Germany. I certainly did not want to leave Norway before I had finished my education. But I decided finally to accept. The result was that I lived in Germany from 1948 to 1953 and it’s no exaggeration to say that I became as fond of Germany as I am of my own nation.’ 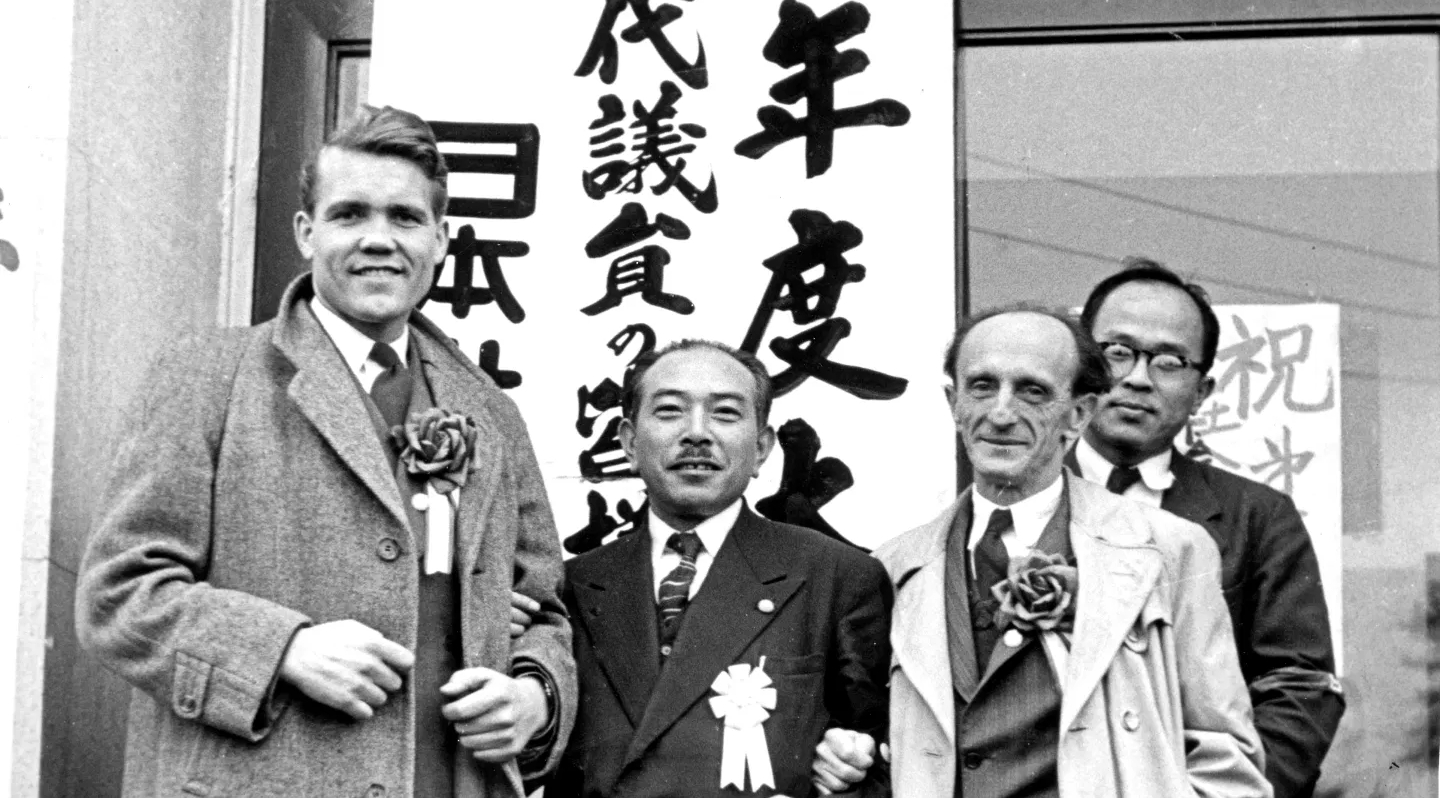 Jens Wilhelmsen (left) and Max Bladeck (2nd right) after addressing the Congress of the Japanese Socialist Party in Tokyo. Max was a miner living in Moers, northern Germany, one of the first towns to receive the cast of the play The Forgotten Factor. Jens stayed in his home during this campaign. The invitation to them to visit Japan in 1953-4 was prompted by the revolution in industrial relations that was known to have taken place in Germany, which intrigued the Japanese who were facing similar issues.

Jens describes those years in his book Eyewitness to the Impossible. The group’s work focused on the Ruhr, Germany’s industrial heartland and a hotbed of class struggle. They criss-crossed the region with a play on industrial relations, The Forgotten Factor, talking and debating with audience members after each performance. As hotels and guest houses were mostly in ruins, the group stayed with families in the towns and cities they visited. With one mining family Jens slept on the living room sofa, getting up at 3:30 each morning to spend time with his host before he left for work. The group contributed to a new spirit of trust between management and workers. In 1951, a new law on co-determination in heavy industry laid the foundation for the Wirtshaftswunder, Germany’s economic miracle of the 1950s.

‘I am deeply disappointed to witness the revival of nationalism in Europe today’, says Jens. ‘We have all seen Europe’s inability to cooperate to help refugees, or overcome inequalities among its own people. These are symptoms of a deeper illness: we have put individualism before community and economic growth before the eco-system on which our future depends. That is why I talk of disillusionment.’

‘Why am I harking back to events in the Ruhr, sixty years ago? Because the presence and common commitment of a group of Europeans helped the disillusioned Germans believe that a new Europe was possible and that there was a place for them. Today’s generation may have the common task of helping Europe through its current predicament.

‘We Europeans betrayed our values by starting two world wars in the last century and by the excesses of colonialism during the centuries before. We owe the world an apology. The best form of restitution would be to make Europe a living example of how people of different nationalities, religions and political beliefs can live together in peace.’