Aboard the miracle train

The award-winning nurse who took healthcare to rural South Africa tells Mary Lean about her journey.

When Lillian Cingo retired from managing the neurosurgical unit at London’s Royal Free Hospital, she had every reason to put her feet up. Her back was wrecked from over three decades of nursing, during which she had reached the top of her profession, winning awards in both her native South Africa and in Britain.

Instead, she chose to spend 13 years living on a train, sleeping in a bed so narrow that she had to wake up every time she turned o ver. Millions of South Africans have reason to be grateful for that decision. The train was South Africa’s Phelophepa (‘good clean health’) train, which set out in 1994, with Lillian as its manager, to bring health services to remote rural communities. Since then Phelophepa (which now runs two trains) has reached over 5.5 million people with medical, dental and eye care and counselling. It has given 20,000 student doctors an insight into rural needs, and every year trains nearly 600 volunteer health workers, chosen by their communities.

The train, which is run by South Africa’s freight transport company, Transnet, spends a week in each community, at their invitation. Their engagement is key,  says Lillian. ‘We would say, “It’s your train, its success depends on you.” It would never have worked if we had just arrived.’ 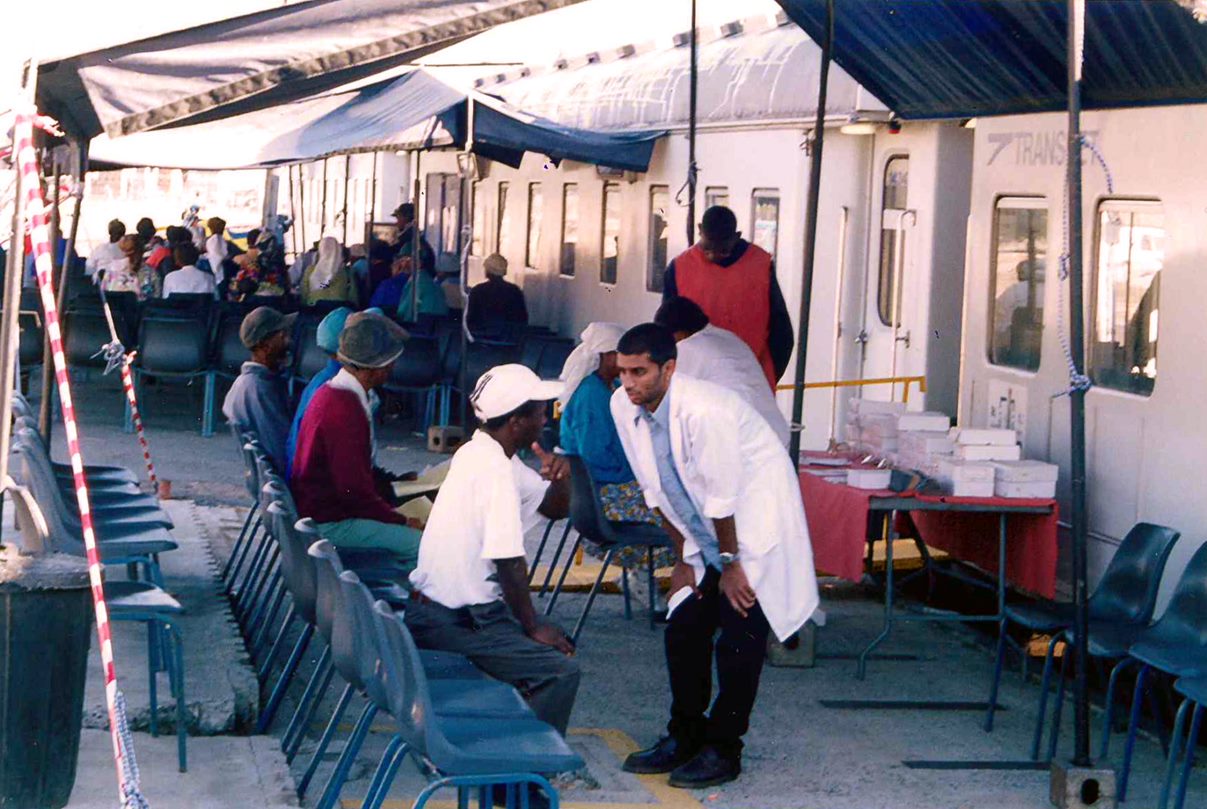 An optometry student consults with a patient at the Phelophepa train

Lillian has countless stories about the impact of the ‘miracle train’, as many call it: the uncontrollable schoolchildren who turned out to need glasses, and later won scholarships; the passive physically challenged children whose faces lit up when they were given crayons; the traditional healers who learnt how to avoid infection and now boast that they are ‘Phelophepa doctors’; the students who worked late into the night when a busload of patients arrived after hours; the student optician who helped his patients choose flattering glasses. ‘Things like that make people feel tall and loved,’ she says. ‘It was not just treating people, it was giving people dignity and self-respect.’

She talks too about the lessons she learnt. In one community, local teachers arrived late for a meeting. ‘I was getting so agitated. I told them I was disappointed. Then they told me that two of their children had just lost their parents to HIV/AIDS and they had had to arrange where they would go after school, and collect money for the coffins. That humbled me. We just don’t know how people’s lives are.’

Lillian’s journey to Phelophepa began in Flagstaff, a village in the Eastern Cape. Her great grandfather, King Faku of the Pondo people, invited Methodist missionaries to his kingdom; her grandfather wrote two hymns in the Xhosa Methodist Hymnbook. Her parents were both teachers. So she grew up in a family with a strong Christian faith and tradition of service. As a child she would take off her shoes before she walked to school. ‘No one else had shoes: I wasn’t going to be the only one.’

She trained as a nurse at Baragwanath Hospital, Johannesburg, and was chosen by Robert Lipschitz, a pioneering neurosurgeon, to work on his ward. By the end of the first day she knew she had found her niche. Lipschitz urged her to go to the National Hospital for Nervous Diseases in London to train as a neurological nurse specialist, a career unavailable to her in apartheid South Africa.

It took her two years of struggling with obstructive officials to get her passport. ‘One chap said, “Why does  a kaffir want to go overseas?”’

In London she met her future husband, Reg Hlongwane, a fellow South African who had campaigned against racism in sport and finally had to leave the country. They went together to a play at the Westminster Theatre, the London centre of Initiatives of Change (then Moral Re-Armament). The experience was a turning point . ‘My life had been so full of anger and being let down, and Reg’s had been so full of being tortured and beaten, so talking to people who were different from us colour-wise, but treated us with decency and respect, was so important.’ She was particularly impacted by the practice of taking time in quiet, to listen to God’s voice in her heart.

Lillian says she didn’t encounter racism in the UK , maybe because she worked ‘in a profession which had no time for that’. She revelled in being trusted to put money in an honesty box when she bought a paper and was surprised to find that the police were friendly. ‘All those small but big things.’ 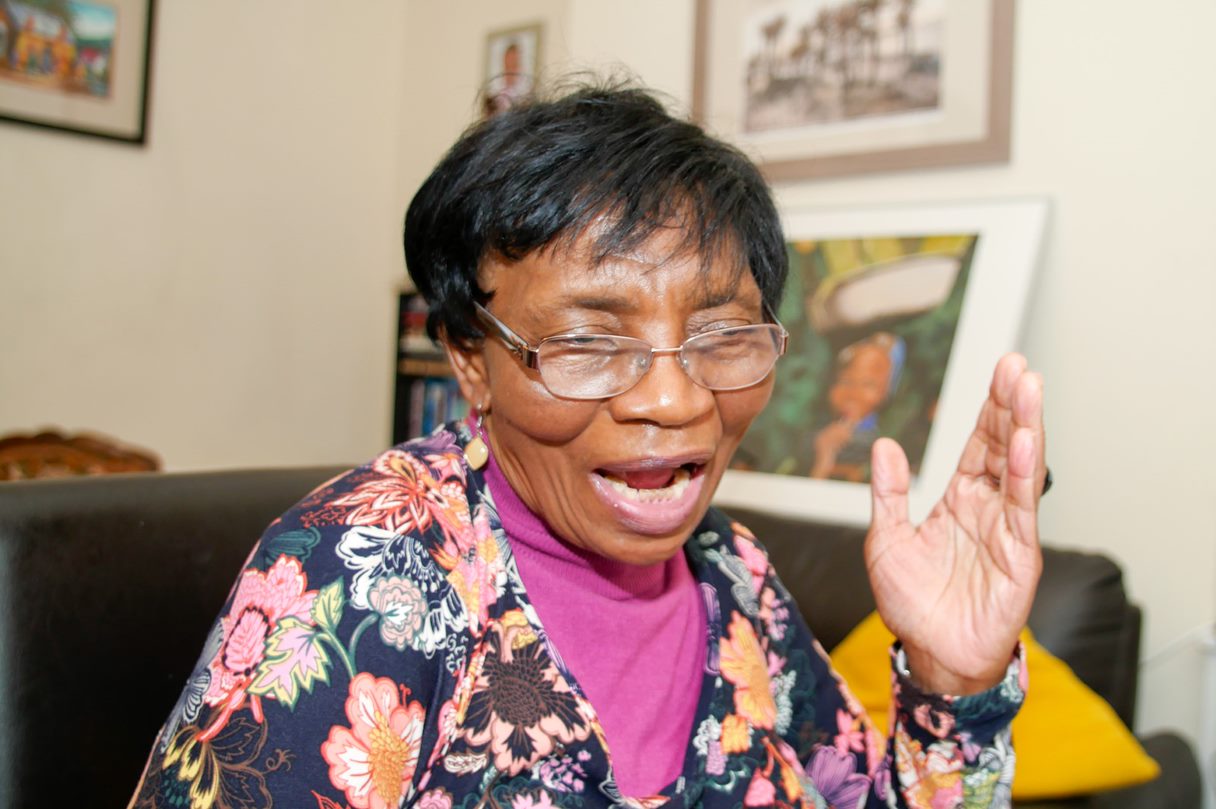 Not that life was easy at home. Reg could be violent, and finally, in 1977 when their son Jameson was about eight, she left him. By then she was working at the Royal Free, where she had set up the neurosurgical unit. ‘When I was at work I could block it all out and focus,’ she says. On the day that she left home, she stayed late at work looking after a child who had had surgery. It was only as she left the hospital, that she remembered that she and Jameson had nowhere to sleep.

They went to a launderette to use the phone. Nobody would take her in, once she said she had a child. Finally she thought of the Samaritans. By now she was so emotional that she could not speak, so an English woman who was waiting for her washing made the call for her. They spent that night in a home for battered women.

The divorce took five years to come through, because Reg was so personable that the court would not believe that he was abusive. ‘We went to the High Court of Justice 12 times,’ she says. Now, nearly 40 years later, Reg has dementia. She visits him regularly in his nursing home when she is in the UK .

Lillian retired from the Royal Free in 1989. While working, she had prepared herself to return home, when the time came, b y taking a Masters in counselling psychology and a diploma in HIV /AIDS counselling. In 1994, in Nelson Mandela’s free South Africa, her chance finally came. When she left Phelophepa in 2008, she was a South African icon, with five honorary doctorates to her name.

She now divides her time between Britain and South Africa, but plans to move permanently to South Africa in 2018. She speaks of her concern f or HIV/AIDS education, and for children from violent homes in Soweto’s most deprived communities. So she still won’t be putting her feet up. ‘When you have received a lot in life, you’ve got to give,’ she explains. ‘I’ve got so much to do because I have been blessed in so many ways.’