Clean water and the inner voice

IofC’s centre in India has a unique approach to social change. Mary Lean finds out more.

Until recently, Poonam Mandhare had never left her house alone. Her life in the village of Pachputewadi in rural Maharashtra, India, was ‘without joy’. Then something changed in her relationship with her husband, and she found the freedom to go shopping on her own in the city. ‘I felt I had power to make decisions for myself,’ she says. ‘I am happy now.’

Poonam ascribes her new independence to ‘inner listening’ – the practice of seeking insight in silence from ‘the inner voice’, as Mahatma Gandhi called it. She learnt this skill from Asia Plateau, the Initiatives of Change centre in Panchgani.

The centre, which celebrated its 50th anniversary in January, runs some 100 training programmes and conferences a year, with nearly 4,000 participants from all walks of life. These programmes all start from the premise that inner change can be the catalyst for change in society – and that the wisdom born in quiet reflection is the key to this.

Poonam and her neighbours are transforming their village with the help of Asia Plateau’s rural development programme, Grampari. They have learnt how to protect their water sources and manage their waste. They are among 13,000 villagers in the area who now have clean drinking water thanks to the programme.

Even more striking than these achievements are the changes in deeply entrenched prejudices, particularly towards women. One village recently invited widows, who are traditionally shunned, to a religious occasion. Pachputewadi’s women have set up a federation, started a business and are now included in official village meetings.

The anniversary conference in January showcased examples of such changes from other sectors. Lakshmi Kumar, Director of the Orchid School in Pune, decided to take her entire staff, including cleaners and security guards, to Asia Plateau. They drew lots as to who would share bedrooms. Lakshmi found herself sharing a room with one of the cleaners, who was distraught at the prospect. ‘I realized how costly the caste, class and education system can be,’ says Lakshmi.

In the 15 years since then the school has dismantled its hierarchical segregation – ‘not as a favour but out of respect for the support staff as part of the therapeutic community. We still have some way to go, but you should see them now!’ 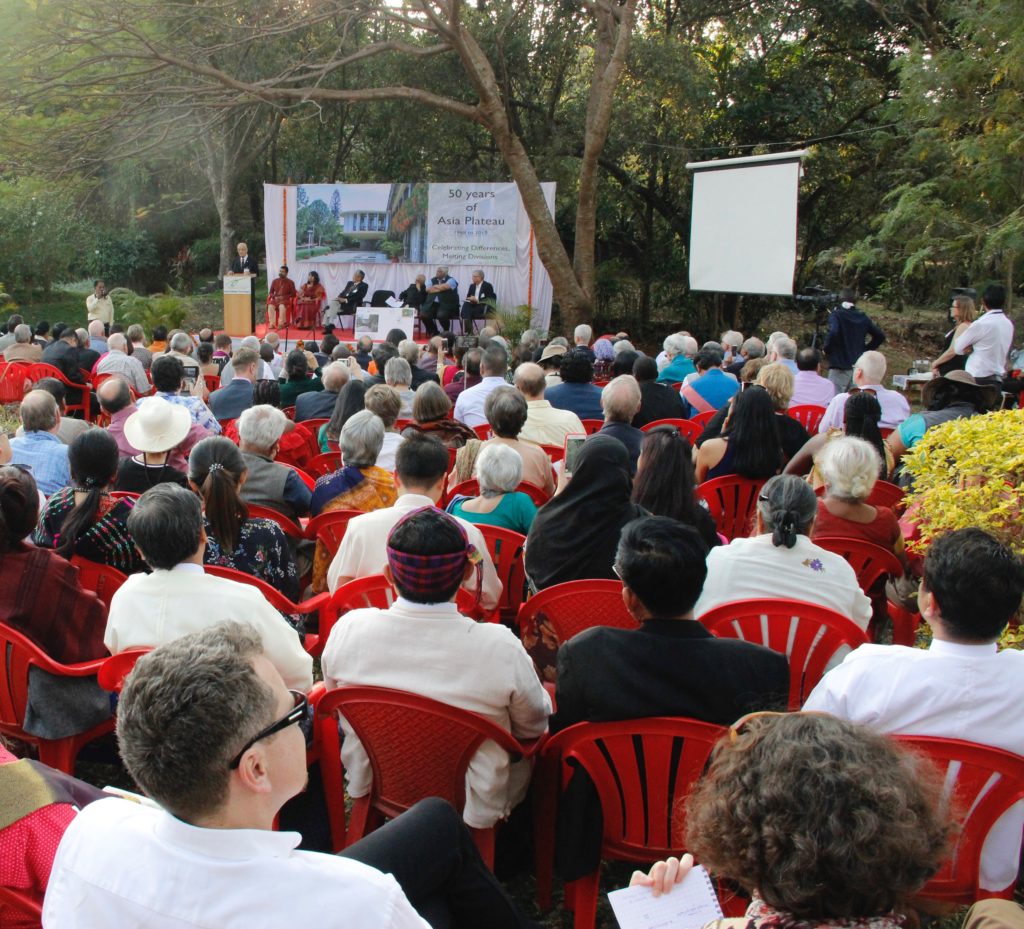 Asia Plateau has been running programmes for industrial workers and managers for the last 45 years. ‘Our factory in Pune had a strong attitude of “us” and “them”,’ says Jacob Verghese, head of human resources for SKF India, a Swedish multinational. The trust quotient was so low that in 2010, when the group decided to give mementos to all its employees to mark its centenary, the workers in Pune held out for money instead. ‘For six months, relations were strained, production was impacted and the atmosphere was vicious.’

The State of Madhya Pradesh has recently set up a ‘Ministry of Happiness’ (Rajya Anand Sansthan). Among other initiatives, it has trained 200 volunteers to spread the practice of inner listening in government offices. ‘I had learnt about inner listening at Asia Plateau and I wanted to take it to a larger group of people,’ says the State’s Additional Chief Secretary, Iqbal Singh Bains. He is one of 400 members of India’s civil service elite who have taken part in programmes on Ethics in Public Governance at Asia Plateau, organised by the IC Centre for Governance in Delhi.

Asia Plateau traces its origins to 1963, when Rajmohan Gandhi, a grandson of the Mahatma and now a well-known historian and author, led a ‘March on Wheels’ for a ‘clean, strong, united India’. It crossed eight states, and sparked a huge amount of interest, especially among young people. Out of the follow-up came the invitation to set up a permanent IofC centre in Panchgani.

Since then thousands of young people have come through the centre, and returned home to put what they have learnt into practice. Most of the 400 volunteers who come to Asia Plateau every year to run its courses and conferences first got involved in this way, and a series of programmes for young people from India and beyond runs through the year.

Every June, 200 young people come to Asia Plateau for an eight-day, Let’s Make a Difference, camp. Over 20 years ago Deepak Ajwani, editor of The Economic Times website, was one of the participants. ‘What I learnt has formed the bedrock of my personal life,’ he says. ‘These learnings are applicable in your daily life, and they make a difference.’