Drums no guns – healing the community

Ram Bhagat helps survivors to find healing through the rhythm of the drums. He talks with Yee-Liu Williams.

It was Drums No Guns (DNG) that led the Million Mom March along the National Mall in Washington, DC on that Mother’s Day in 2000, rallying the largest gun control demonstration in American history.

Looking back on that day, the co-founder of DNG, Ram Bhagat, recalls the beating of the drums and the ‘cries of the women who had lost their children’.

For him, the pain is personal. He will never forget the ‘primal scream’, when he told his mother that his brother, Lester, had died from a gunshot wound. ‘Our lives changed in an instant,’ he says. Nearly 40 years on, it is possible to heal but ‘it takes a long time and leaves scarring’.

Ram co-founded DNG in the early 1990s to unite people of all ages and races and promote understanding and healing. He sees drumming as a spiritual practice where ‘the drum uplifts us and connects us.’ Drumming is a powerful ‘metaphor for the natural rhythm of life’.

Now 63, he is an award-winning science teacher, educationalist and academic, who says his life path is in healing trauma in classrooms and communities. He holds a doctorate and a number of emeritus positions, and travels the world as a motivational speaker, workshop facilitator and yoga practitioner. Among his specialist areas are restorative justice in education, trauma awareness and resilience, and culturally responsive mindfulness practices. 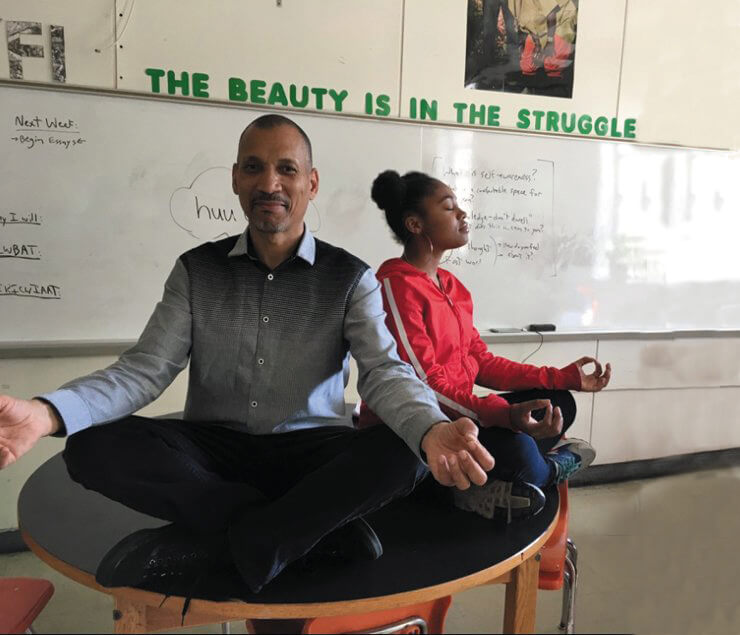 Ram grew up in a predominantly Black neighbourhood in New Haven, Connecticut. His early education was at a private Catholic school but, uncomfortable about the ‘hypocrisies of his world’, he ‘arranged’ his exit from private schooling. He then enrolled in a local public school, which made him feel more ‘at home’ in his neighbourhood.

In 1975, he went to Virginia State University, where he me Janeshwar Upadhyay, a professor of microbiology who became his spiritual mentor. Ram had already been reading about yoga and Hinduism. ‘Everyone is Hindu,’

Upadhyay told him. ‘It doesn’t have a particular belief other than you believe in God and that God is in all things.’ Ram decided to convert to Hinduism and, asked Upadhyay for a new name. He was given Ram Bhagat – meaning ‘Devotee of God’.

Ram started integrating drumming and dance into his science classes to teach chemical bonding, in response to his students’ different learning styles. He sees the classroom as ‘a microcosm of society’. The disparities there often show him which students have experienced, witnessed or been traumatised by violence.

Since the massacre at Columbine High School in 1999, the US has seen countless school shootings. Even before then, Ram says, ‘we were already dealing with a lot of gun violence in the community’. He attributes the ‘dark cloud over the United States’ to the media’s glorification of ‘I need my protection. I need my weapon’. Many teenagers do not know whether they will live to celebrate their 18th birthday.

The shooting of 20 children and six adults at Sandy Hook Elementary School, Connecticut, in December 2012 hit Ram particularly hard, because it took place in his home state. ‘I played my drum right there to do some healing,’ he says. Each time the news breaks of yet another mass shooting, ‘it motivates me to do even more’.

The country is anaesthetized to the reality of gun violence, he says. Youth are using guns to solve conflicts. ‘We have so many guns per capita’ – twice as many as in 1968, according to the Congressional Research Service.

In 2009, there were more than 300 million guns in circulation in the US. The debate around the Second Amendment – the right to bear arms – is one of the most divisive in American society. 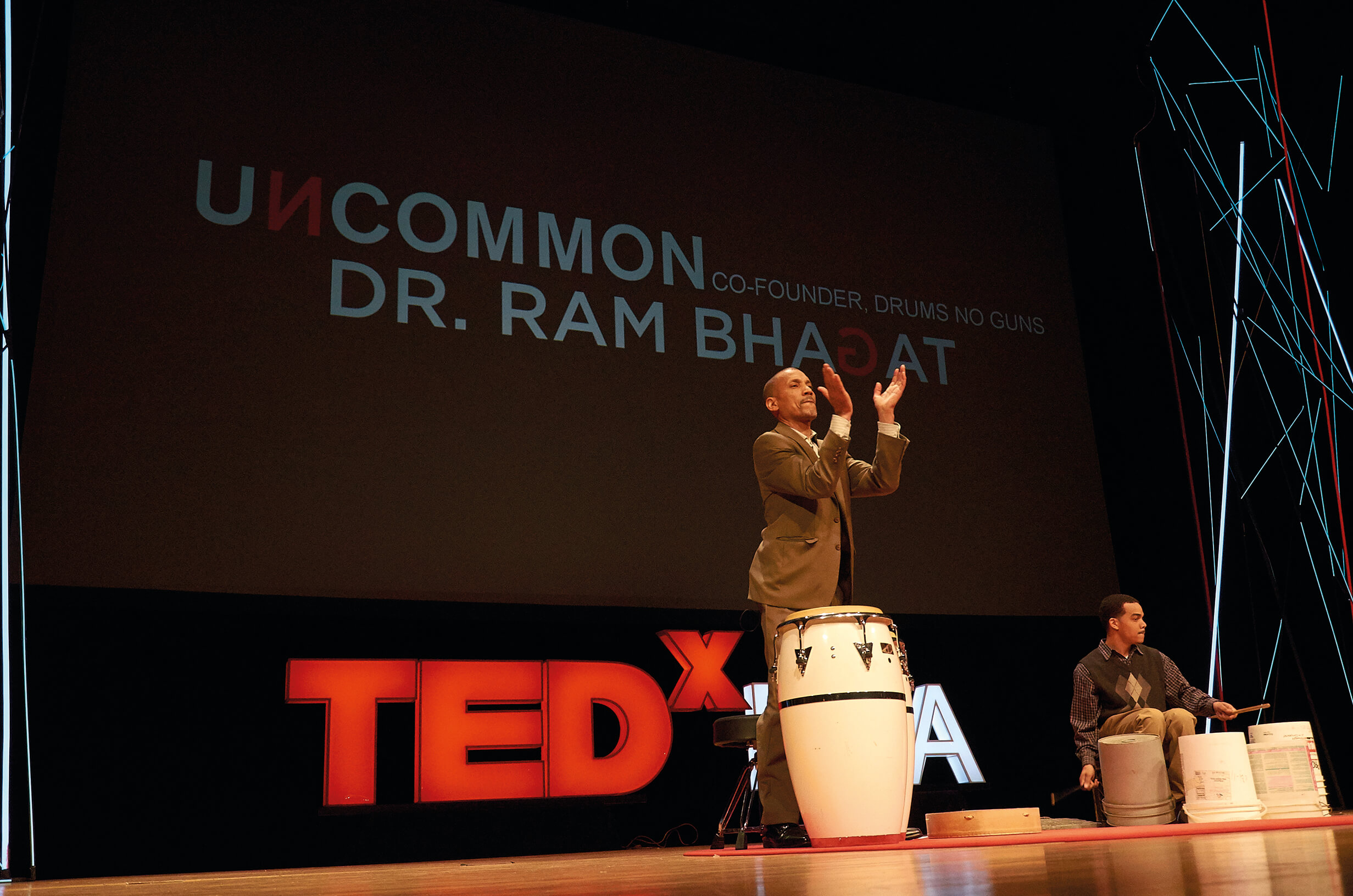 The Drums No Guns Foundation is about teaching young people that
they have a choice and that they can choose ‘life over death’, he says. ‘It’s not a campaign around the Second Amendment, it’s a movement about dignity, mutual respect, peace and love. Let’s not even get to the point of that’s how you want to solve a conflict.’ They called it ‘Drums No Guns’ rather than ‘Drums Not Guns’, because the title was less directive and ‘to give it that artistic flavour and break with convention’.

The non-profit foundation is an invitation to examine the ‘national conscience’. Ram sees violence as a chronic symptom of ‘social arrhythmia’. Where there is mistrust, alienation and disconnection, he says, ‘we lose touch with our own natural rhythms and the ability to create healthy communities’.

Ram talks about last June’s I am here exhibition in Richmond, Virginia, organised by Initiatives of Change US, to ‘offer a communal space of expression on gun violence’. The DNG Foundation offered ‘drumming circles’, where survivors had the space to express their feelings. He talk about the case of a woman who, after his circle, was able to talk for the first time about her feelings about losing her twin sister.

As one of the oldest and most widespread of instruments, the drum ‘resonates with us on that primal, emotional and spiritual level’, Ram explains. When people ‘move to the rhythm’, this ‘taps into the primal instincts and emotions’ and helps to release the storm of traumatic energy.

Ram at the Toward Inclusive Peace conference at the Caux Forum. Photo courtesy of Initiatives of Change Switzerland

At the Towards an Inclusive Peace conference at the Caux Forum in Switzerland in July, Ram invited his rapturous audience of peacemakers to feel the rhythm and come together to the ‘heartbeat’ of the drum. He makes no claim to have a solution to world problems but is confident that ‘healing with rhythm’ can address the trauma that ‘we’re experiencing right now’. Activists have a tendency to give out to others and neglect themselves, but it all starts with ‘self-healing, selflove’, he stresses. ‘I’m a survivor,’ he says. ‘We’re all survivors.’