From despair to resilience

Talia Smith finds out why Ben Margolis and Sophie North founded a home of sanctuary for refugees and asylum seekers in the Norfolk countryside.

‘What I do is born out of the fact that I am a third generation Russian immigrant,’ says Ben Margolis, co-founder and Executive Director of The Grange, a smallholding in West Norfolk which has provided a sanctuary for 500 refugees and asylum seekers from more than 40 countries since 2012.

Born in Yorkshire, Ben has been a national ranked badminton player, a tennis coach and Campaign Director of the Global Campaign for Climate Action leading up to the Copenhagen climate conference in 2009. ‘After Copenhagen, like a lot of people, I felt extremely frustrated, disillusioned and burnt out,’ he says. He and his doctor wife, Sophie North, started thinking about how they could be more effective.

A first clue came during a course in permaculture, which takes its inspiration from the health and resilience of the natural world. It stresses care of people and the earth, and the fair distribution of resources. Ben started to think about how these principles related to activists: and realised that care for himself was an element of care for people. Ben spent a year volunteering with the Berks, Bucks and Oxon Wildlife Trust. ‘It was the most amazing time: chasing sheep and spending days counting orchids whilst thinking what to do next!’

What they did next was to set up The Grange, a listed 18th century rectory set in 10 acres of countryside in the village of Great Cressingham. ‘We wanted to have our own permaculture small holding where we could put into practice the theory we were inspired by.’ Through their work, Ben and Sophie had both had contact with refugees and asylum seekers, and they knew they wanted their home to be open to others. Today, The Grange is a permaculture demonstration site and the first place in the UK to be designated as a Home of Sanctuary.

The Grange receives refugees and asylum seekers  through formal channels, usually for about a week – although people are welcome to visit regularly. Those who come to stay are not guests, visitors, beneficiaries or service users, but family members, with about 15 people sharing the home at any one time. Ben is quick to point out how he and Sophie have benefited from the experience. ‘Sharing our home with people from all over the world restored our faith in the human capacity for love, kindness, forgiveness and resilience.’ They have moved from their post-Copenhagen despair about humanity to feeling part of creating a more sustainable, resilient and equal world.

They see The Grange as a pilot. Since the Syrian crisis has been in the headlines, Ben has been contacted by a number of people who want to start similar projects in different parts of the country. A central tenet of permaculture is to ‘go where the energy is’. Ben doesn’t go out shouting that everyone should do what he does, but he responds to the energy that is being created. 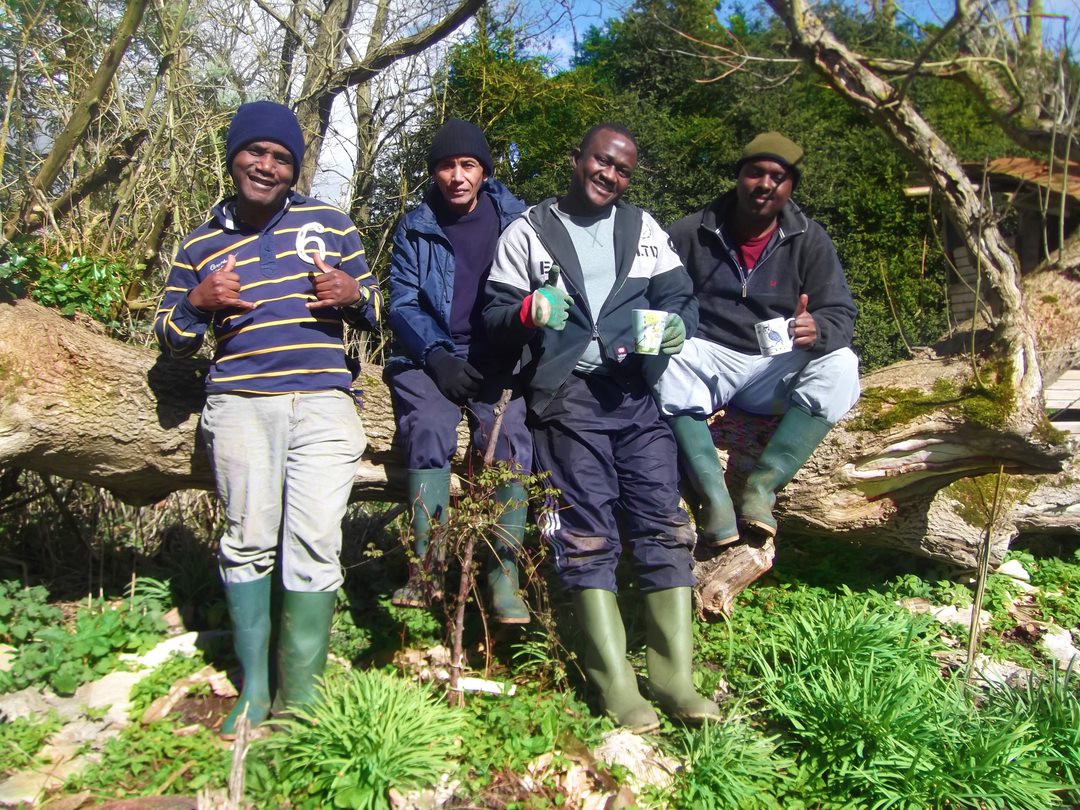 Another key thread of permaculture is ‘no guilt, no judgement’. Ben explains that activists tend to spend a lot of time feeling guilty and judging others, both of which are damaging and negative emotions. The Grange’s residents have taken particular care about relations with their neighbours in the village. ‘We are proud that we have huge support which wasn’t necessarily going to happen.’

While he was working in NGOs, Ben saw many organisations which were dependent on their founders. To avoid this, Sophie and Ben have been planning their exit strategy from the start, and this year they have handed over to two new live-in coordinators. ‘It’s not Ben and Sophie’s project; it’s the community’s,’ he says.

Ben believes that traditional skills are going to become more and more important in communities. Some of those from other countries who have stayed at The Grange have passed on their traditional skills to the team. ‘For us it is fantastic and for them it is powerful to offer their own skills and not to be seen as a charity beneficiary.’ The Grange offers a spectrum of workshops from weaving and tapestry-making to woodwork and horticulture.

Ben has recently received funding to develop ‘Gardens of Sanctuary’, a project to enable community gardens all over the UK to engage with refugee and asylum populations. ‘The aim is to bring these people into the garden and to do all of these things together – community integration, traditional skills and the culture of hospitality,’ explains Ben. Many projects and initiatives have been inspired at the Grange, making ripples across the country and Europe.