From rags to dignity

The lack of sanitary protection adds to the misery of women refugees. Amy Peake has found a solution. She talks to Mary Lean.

A picture in a magazine in a doctor’s surgery launched Amy Peake on a mission to transform the lives of millions of refugee women.

When she saw the photo of 25,000 people queuing for food in a refugee camp in Damascus, she thought, ‘How would I cope with no food, no water, no shelter, no access to medicine? What if my husband had been killed and I had to fend for my children alone?’ And then she thought, ‘And what if I had my period?’

Since March 2014, this question has taken the Pilates teacher and mother of three from Cornwall to Jordan, India and Turkey. In Za’atari Refugee Camp in Jordan, home to some 100,000 Syrian refugees, she discovered that women cannot afford to buy the expensive, poor quality sanitary pads available in the camp shops. Instead they use rags, which can lead to infection, because of the lack of soap and privacy to wash them properly. Agencies distribute pads, but only infrequently and only to 14- to 40-year-olds.

She also discovered a second problem: incontinence. While agencies provide nappies for babies, there is no provision for traumatised older children who bedwet. Adult nappies are needed for the disabled and elderly. She met a woman with four disabled children, who she had to carry to the communal toilets when she could not afford to buy pads.

In a search for solutions, Amy travelled to Tamil Nadu, India, to meet Arunachalam Muruganantham, the inventor of a revolutionary low-cost sanitary pad machine. Further research took her to Swati and Shyam Bedekar in Gujarat, who have adapted his prototype to use cheaper materials and produce larger pads. The Bedekars will provide the machines for a pilot project in Za’atari which will employ refugee women to manufacture sanitary towels and incontinence pads.

Meanwhile, she has been working on a second pilot project, to produce re-usable nappies for babies, children and adults. These don’t need special machinery, just sewing machines, which she is buying now. A manufacturer in Turkey sold her the materials needed to make up to 40,000 nappies, at a ‘ridiculously good price’. ‘He put a nappy factory in a container and sent it to the camp.’

The project has the backing of the United Nations High Commission for Refugees (UNHCR) and will be run by the Norwegian Refugee Council (NRC). ‘The UN have given us a massive tent, their old gas distribution centre. The floor is being concreted this week. The cutting tables and sewing machines will be in portakabins. UNHCR will pay 15 of the most vulnerable women – heads of households who are caring for their families alone – to do the work.’ While she was in Za’atari in April the first prototype nappy was produced and, by the time you read this, the factory will be running.

Her charity, Loving Humanity, has raised enough money to buy the materials and machinery for both pilot projects in Za’atari. (Amy covers her own travel costs from her savings and Pilates earnings.) She hopes that in the future UNHCR and NRC will carry the projects forward, buying the raw materials, employing women from the camp and giving away the pads. ‘It will save them millions of pounds, just on adult nappies. It costs them so much to supply them that in some instances they have stopped altogether.’ Her dream is that they will extend the project to refugee camps all over the world. 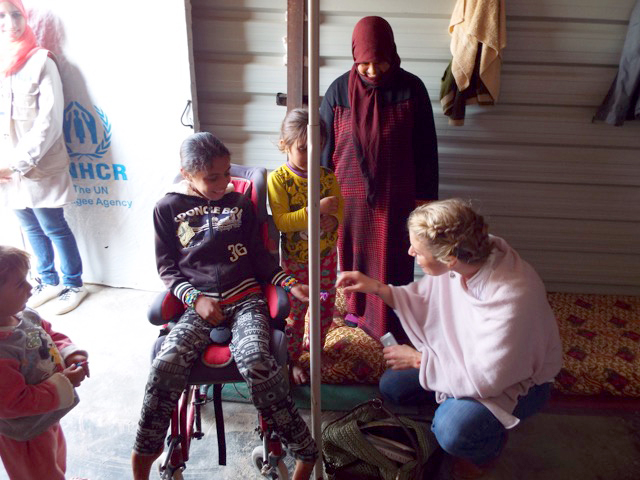 How has she coped with the frustrations and setbacks of the last two years? ‘I just keep taking the next step forward,’ she says. Amazingly, she doesn’t have sleepless nights, though she tends to do her ‘creative brain work’ lying in bed, last thing at night or first thing in the morning. ‘If I can imagine it in my brain then I know I can create it. The only thing I find really necessary is to give myself the space alone to be able to dream.’

Her daughters, aged 12, 10 and six, have adapted to her absences, which she points out have built up slowly, and usually only last a week at a time. ‘To begin with there were tears, which we all found really hard, but they’re getting used to it and know I am coming home. I think we will all be stronger and better for it.’ Her husband, Tom, and her mother are ‘massively supportive’.

She will go back to Jordan soon to sign the paperwork handing the project over to NRC. This will free her to look at possibilities in Turkey and Lebanon, and further afield. Since the BBC took up her story in December 2015, she has had enquiries from people in 22 countries, all wanting to get the sanitary towel machines into their communities.

Menstrual hygiene is not only an issue in refugee camps. A survey in 2011 found that only 12 per cent of women in India use sanitary towels. Inadequate and unhygienic alternatives keep girls in poor rural communities away from school, and cause 70 per cent of reproductive diseases in India. Women all over Africa, Asia and Latin America face similar problems.

‘This invention is the most brilliant solution to helping girls get educated,’ says Amy. ‘Ultimately that will completely change the world. There’s no way I am going to drop the bone.’