Grampari: Where simple solutions start from the heart

Mary Lean visits a rural development centre in India which is driven by local needs.

A short walk from the conference buildings at Asia Plateau, the Initiatives of Change centre in Panchgani, India, takes you to Grampari, the rural and ecological centre. At the core of all its programmes are the concepts of ‘be the change you want to see in the world’ and of inner listening.

The first thing you see as you walk into the compound is the ‘tippy tap’: a handwashing device made from a plastic water container, three sticks, a bar of soap and some string, and operated by a foot lever. Because the device is hands-free, it doesn’t spread infection. It is estimated that handwashing with soap could save 1.2 million children’s lives each year.

1.2 million children’s lives each year. Grampari promote this simple device, along with a cheery handwashing song, in schools around the area, as part of their health and hygiene programme. They stress that they are not a charity, but a development organization, whose programmes are designed, implemented and maintained by the local communities. Eighty per cent of Grampari’s staff are local.

The building next to the tippy tap is home to Grampari’s livelihoods programme. Here women train for a sewing certification, which qualifies them for a government subsidy to buy a sewing machine.

Shubhangi Autade, who manages the livelihoods programme, is full of stories of how earning power has transformed life for women trapped in traditional, and sometimes abusive gender roles. The programme also trains young people to make, maintain and market solar lanterns, giving them both technical and business skills. The lanterns enable children in homes without electricity to study after sunset. Other courses include IT skills, mobile phone repair, brick making and embroidery.

Grampari’s organic farming programme promotes ecological means of cultivation, which are showcased in the garden around the centre. Its watershed programme teaches villagers how to look after their springs. Its youth and governance programme offers training for those involved in village councils and for young people.

In 2014 it gave awards to women who had taken leadership in their communities. The winning self-help group ran a successful poultry and dairy business in a remote village, and marketed packs of ingredients for Hindu festivals. Eleven of its 14 members were illiterate. The winning woman sarpanch (head of the village panchayat, or council) had rallied the women in her village to pipe clean drinking water from their spring, close down a liquor shop and ensure that all the houses in the village were jointly owned by husband and wife.

Grampari has recently launched the Grampari Adopted Village programme, which brings together all Grampari’s programmes to work with villagers who want to create an ideal sustainable village. Five villages have been adopted under this scheme.
www.grampari.org

Why did Archana Rao give up her career to work at Grampari?

In 2013 I chose to leave London, a city I loved, and a job in publishing I loved, and returned to India to work at Grampari. I had decided to endeavour to live a compassionate life. I am nowhere close to it yet but I keep trying.

I work on the watershed programme, which aims to protect the springs in the region so that the villages get clean drinking water, and to put water back into the earth so that the aquifers – the underground basins of water – are recharged. In India the aquifers are depleting at a dramatic rate. In our region, where one aquifer provides water to several villages, villagers sometimes have just two pots of water per day for an entire household.

Earlier this year eight villagers came to our office. They wanted to resolve an issue with a neighbouring village. We discussed the problem. We also talked about the depletion of water in the springs. We ended with a time of silence to seek any fresh ideas.

After five minutes of silence, one person shared his ideas. ‘In our village, we all protect each other’s homes,’ he said. ‘Why can’t we protect our hill in the same way, by bringing together all the villagers and villages who live around the hill?’ During the following weeks, this proposal was discussed in the villages, and understanding grew that this was how they could protect the aquifer in the hill.

In June villagers from several villages came together with us to form an aquifer committee – Bhujal Dharak Samiti. This will be the first committee in India established to look after an aquifer. Inspired by this Grampari-driven initiative, other villages are now working independently towards forming similar aquifer committees. 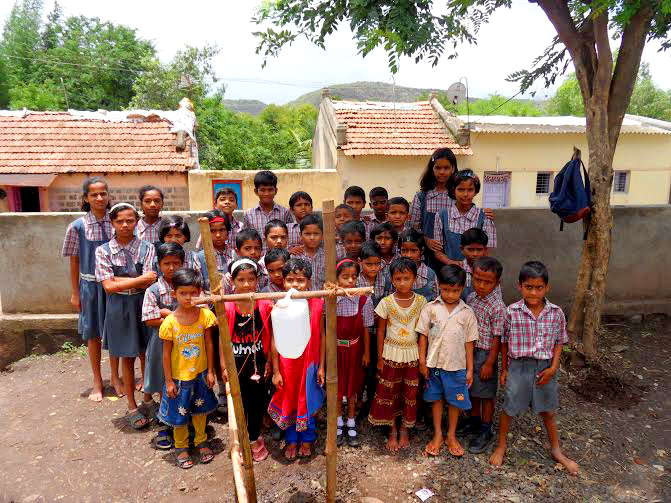