Jonathan Ranger finds out what brought Dwayne Jack back to prison.

At age 29, Dwayne Jack was discharged from prison for the last time. The officers waved him off with ‘Hit the road, Jack, and don’t you come back no more’. But he did come back, though not as a prisoner: Dwayne now works with young offenders, helping them find a new path, as he has done.
As a child, Dwayne frequently witnessed domestic violence within his home and experienced the trauma of later watching his mother being sentenced in court and taken away. He and his two younger sisters were taken by social services.

Without parental guidance, Dwayne slid from being a ‘troubled child’ to ‘a known troublemaker’. From six years old, he was involved in crime, theft, burglary and robberies with older boys. By 13 he was numbing his traumas with crack cocaine. 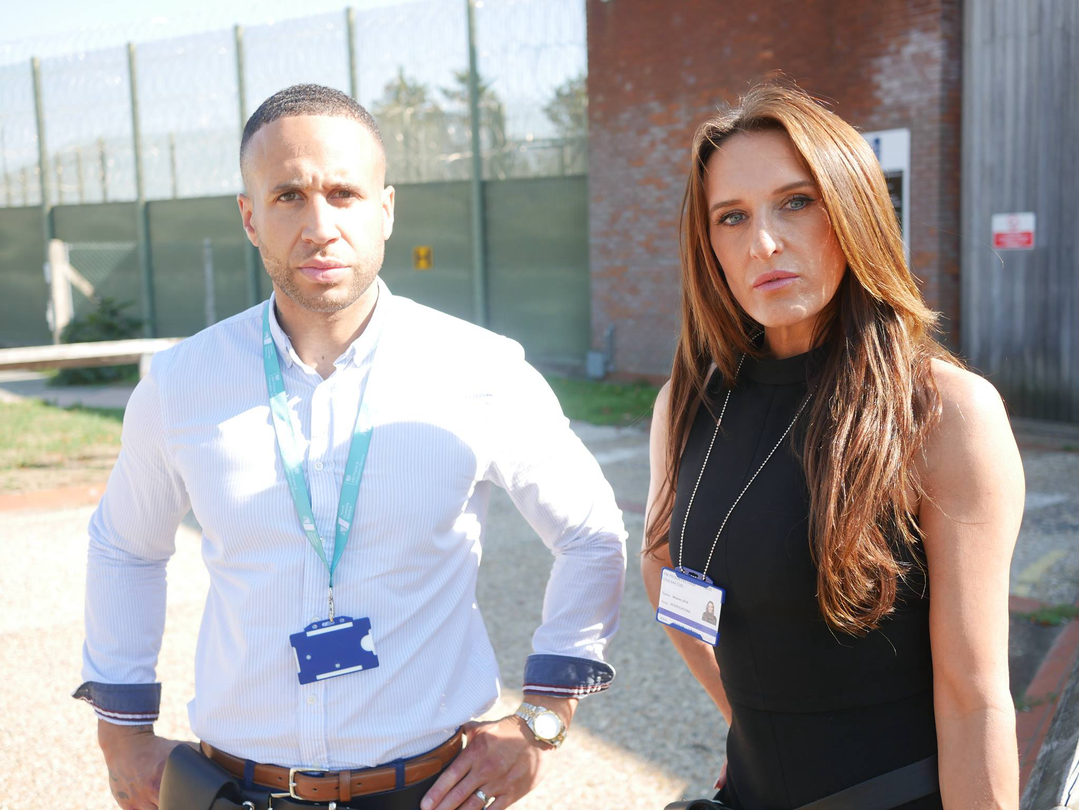 Dwayne and Mel outside Feltham Young Offenders Institution,, where they work to help young prisoners move beyond a life of crime.

‘I was a complete menace to society,’ he admits. ‘At 13, I got my first detention training order (DTO), and by 15 I was in Feltham Young Offenders Institution.’ He recalls the graffiti message on his cell wall: ‘If you smoke crack, you’ll be back; if you think I’m joking, keep on smoking’. For 17 years, he was in and out of prison.

Dwayne bears the scars of gunshot wounds, stabbings and a machete to his head. He was paralyzed down his left side and had several near-death experiences. But the hidden mental trauma went even deeper. He remembers waking up in a seedy hotel room, ‘crying in total despair’, after sniffing cocaine with prostitutes the night before. ‘I’d hit rock bottom,’ he says, ‘the dark night of the soul.’ He was desperate to return to the ‘safe haven’ of prison.

Things were so bad that his girlfriend, Mel, wouldn’t come near him. When they first got together, ‘it was like two shooting stars colliding’. They had both had dysfunctional childhoods, and the pattern repeated. Mel was forced into prostitution at gunpoint in her teens, and became a high-end cocaine dealer.

Back in prison, now aged 27, Dwayne experienced a ‘powerful spiritual awakening’ in which he surrendered to God. ‘During one night, it was like I was vibrating from head to toe, my whole body filled with pure light,’ he says. From that moment his life changed. ‘Next day I gave my TV back, changed the way I walked and talked, and took up meditation, tapping into my higher self and connecting with the universe. I read the Bible. I was literally the happiest person in the prison.’

Dwayne started inspiring other prisoners. He ran meditation workshops. He created a ‘therapeutic urban intervention programme’ based on his experiences and childhood trauma, which he calls Hit the Road, Jack! When he was released, he set up a business, RoadLight Ltd, to run it.

The course, which is accredited by the Open College Network (OCN), includes a mentoring scheme, with shadowing and employment after prison. ‘It deals with forgiveness of self and others, communication, awareness, identity, relationships, attitude, citizenship, exploitation, weapons and violence,’ he explains.

Roadlight targets schools, colleges and universities with its early-intervention programme. ‘We work within the criminal justice system, to identify potential trouble and prevent offending, rather than just trying to cure it. We help young people engage with the feelings and experiences that drive them onto the dark road of alcohol, drugs, crime, sex. Whatever it is, they are doing it to fill the void.’

Dwayne is a sought-after life-coach and motivational speaker, living the life he advocates. When Mel visited Dwayne in prison, he told her that he could not be in a relationship with her if she went on selling drugs. ‘Fortunately she chose me. We realised God had put us together for a reason.’ Mel has now been baptised and they are married. Today they work together at Feltham and other prisons and probation services up and down the country.

‘We’re launching a community interest company in partnership with police, local councils and support groups, Youth For Action and other charities.’ Dwayne has devised a free online training package – Killing the Gangster Within – to help young people on the edge of criminality take a step back.

He speaks of his step-brother and childhood best friend, Darren Casey, with whom ‘we were bad boys together’. He has been on a similar journey of change to Dwayne. ‘He’s waiting to come out of prison to work with us and is already helping other prisoners.’ Young offenders don’t respond to ‘fluffy duffy’, he says, but they will listen to people who have been through the chaos they are experiencing.

Forgiveness – of self and others – is central to Dwayne and Mel’s work. ‘I forgave my mother – it finally allowed me to love and be loved,’ he says. ‘She’s now a Christian too.’

He describes ‘not forgiving’ as being like a bird, which has oil on its wings and cannot fly. Whatever trauma you have suffered, forgiving ‘will set you free’.