Karen Elliott Greisdorf meets a remarkable mother and daughter team, who are offering hope to former prisoners in the US.

The founders of Mission: Launch, Teresa and Laurin Hodge, have always made a strong team. Widowed when Laurin was two, Teresa rolled the job of two parents into one. Later, after Teresa served a prison term, Laurin helped her to realise her dream of helping released prisoners reintegrate in society.

Laurin laughs as Teresa says that stubbornness, along with compassion, empathy and faith, is a quality they share. These characteristics stood them in good stead in 2001, when Teresa came under investigation for white-collar crime, just as Laurin was starting university at the age of 17. Three days after her graduation, Teresa’s trial began. She served 70 months in prison. By January 2015,
when her post-release probation period ended, the whole experience had consumed a third of Teresa’s life and nearly half of Laurin’s.

In prison, Teresa began to focus on what life could mean for her and her fellow prisoners once they’d been released. ‘I was in prison with politicians and prostitutes,’ she says. ‘There were corporate executives and women with mental illness; young women in their teens and women in their 70s and 80s.’ Prisoners have ‘unlimited time to dream big for the future. However,
when you arrive home the stigma and barriers to employment, housing and basic essentials make re-entry feel impossible.’ 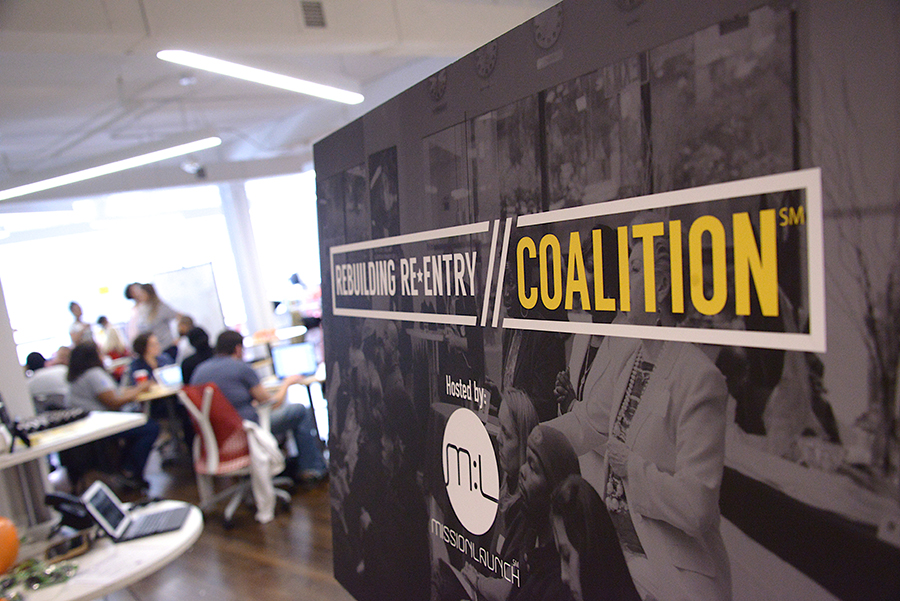 Laurin started university with the vision of going on to medical school, but graduated at a time of national recession when employment for recent graduates was tough to come by. She worked for a health-related charity in Virginia, but, in the autumn of 2009, found herself in a ten-month business studies and leadership development programme at Johns Hopkins University in Baltimore.

‘I knew my mom had the capacity to come home and do all that she’s doing now,’ Laurin says, ‘but that was never really my plan.’ And yet, she was the one who got Mission: Launch up and running after winning a business plan competition sponsored by Johns Hopkins. Other awards and recognition followed, affirming Laurin’s determination to develop the not-for-profit.

Today Mission: Launch produces software to help ‘returning citizens’ to re-enter society on their release, and to shift public opinion about imprisonment. At their annual Rebuilding Re-entry Hackathon, computer programmers, returning citizens and social entrepreneurs work together to develop apps and other technologies.

One programme they have developed is Clean Slate DC, which allows residents of Washington, DC to determine whether they are eligible to file a petition with the courts to have their records sealed or erased. ‘This is impactful because some incidents, such as an arrest record, minor offences and even cases where people were not found guilty of any offence, follow a person forever – limiting their ability to secure housing and employment,’ explains Laurin. 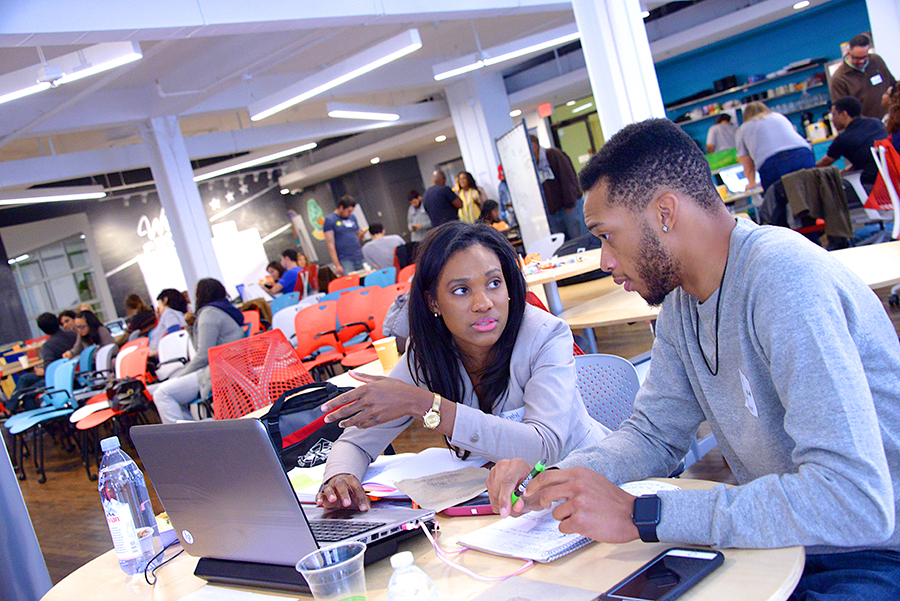 Participants at the Rebuilding Re-entry Hackathon

Mission: Launch founded and manages the Rebuilding Re-entry Coalition, a network of organizations, individuals and citizen-led movements concerned with the challenges facing those who have been imprisoned. They also run a social enterprise which helps to finance Mission: Launch by producing software for commercial clients.

As Mission: Launch was being built, Laurin took part in the Caux Scholars Programme held at the Initiatives of Change conference centre in Caux, Switzerland. The month-long course, which focuses on conflict transformation and building trust and peace in the community, played a critical role in shaping Laurin and Teresa’s life vision.

‘Trust is one of the things you have to repair from the perspective of the general public,’ says Laurin. ‘You have to repair the breach of trust that may have sent someone to prison.’ They asked themselves, ‘Could we look at trust-building as a tool to welcome people back home?’

Mission: Launch’s Director of Communications and Special Projects, Bryn Phillips, first met Teresa at Alderson Prison, where their sentences overlapped for two and a half years. They brainstormed ideas for what the organization could look like one day. Once released, Bryn looked at what other re-entry service providers were doing. She believes that Mission: Launch stands out
because it doesn’t adopt a ‘one size fits all’ approach.

According to Bryn, the different organisations involved in helping returning citizens tend to operate in silos. Mission: Launch brings these different groups together with returning citizens to find ways of simplifying the ‘precarious’ reentry journey, indirectly and directly through the Rebuilding Re-entry Coalition. 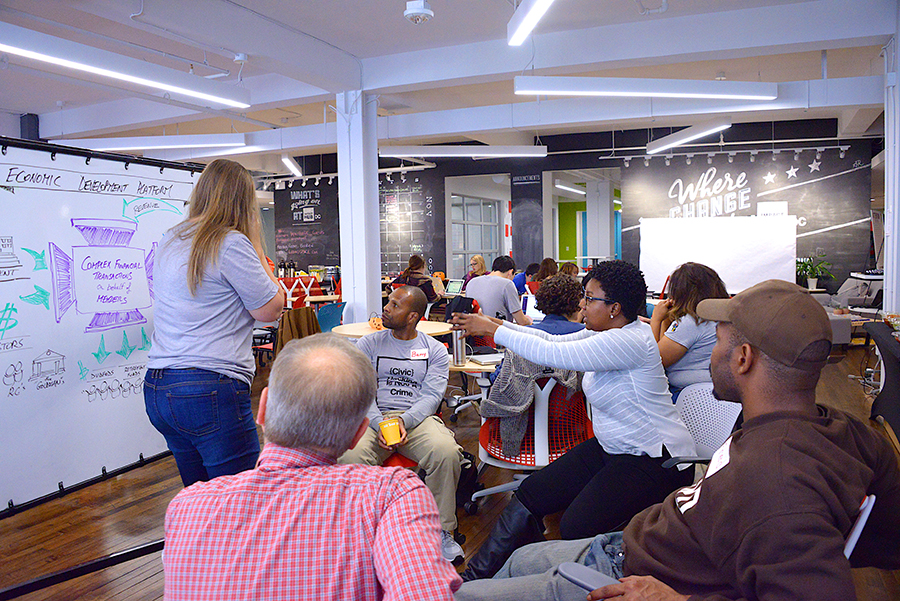 Participants at the Rebuilding Re-entry Hackathon

Laurin and Teresa are invited to speak around the US and have received a number of funding grants. The most recent, from the federal government’s Small Business Administration, will enable them to develop Mission: LaunchPad, an entrepreneurial training programme for former prisoners, to give them an alternative to traditional employment, from which they are so often barred.

In October, the US Department of Justice announced that 6,000 drug offenders will receive early release from prison. It is clear that Mission: Launch’s work will be needed more than ever in the coming months and years. They are about to expand from Washington, DC to Baltimore.

When Laurin was a child, Teresa was her biggest ally. While Teresa was incarcerated the tables turned, with Laurin supporting her. Now, after nearly five years apart and after navigating the re-entry journey together, their partnership is stronger than ever.

‘Many people recognize issues and systematic dysfunctions and leave them for the next person to correct,’ says Bryn Phillips. ‘Laurin and Teresa have the attitude, If not us, who? If not now, when?’
To learn more about Mission: Launch
visit www.mission-launch.org