Onjali Raúf tells Davina Patel why we all need to break the silence surrounding violence against women.

As we meet at one of Onjali Raúf’s favourite places in London – the Wallace Collection – she tells me that she has been a feminist from a young age, but it was her aunt’s murder that spurred her into action. She founded Making Herstory, a charity which mobilises ‘ordinary’ men and women to take whatever action they can to end the abuse, enslavement and trafficking of women and girls.

‘I grew up in an environment where you were always aware of just how much damage and fear one person can evoke in a family,’ she says. As a child, Onjali witnessed her mother working hard to raise women’s awareness of their rights as part of her job, whilst trying to deal with verbal and financial abuse at home. But it was Onjali’s anger at the failure of wider agencies to stop her aunt’s murder, which triggered the creation of Making Herstory.

Mumtahina Jannat – or Ruma as she was fondly called – was forced into marriage at the age of 19 to a man two decades her senior. Abdul Kadir had spotted her in her village in Bangladesh. After having his proposal of marriage rejected three times, coerced her impoverished family into handing her over in marriage. Abused and beaten from the night of her wedding, she was forced to move to the UK in 2000. From within the confines of a council flat, she endured abuse that became increasingly violent with each day. Unable to speak English and with no support at hand, she found herself completely trapped. Surviving abuse during pregnancy and childbirth, she escaped one night following the birth of her second daughter. It became clear that it was not just her life that was at risk, but those of her two little girls.

In 2005, fleeing for her life with nothing but her children, Ruma was placed with a women’s shelter. She located the number of a distant relative in London, Onjali’s mother, who she was able to call.

‘Even though we had never known of her existence until the moment she called, my mum immediately began working to help her,’ says Onjali. ‘The next five years was spent re-establishing her life, getting her kids settled and safe, and helping her fight for her divorce.’ Despite her attempts, Ruma’s impoverished legal standing could not compete against Abdul’s rich one. ‘He had the money to hire lawyers and the knowledge of how to manipulate the system. He made her life miserable by refusing a divorce, challenging the custody of their children, mocking her as he attended anger management classes – whilst she struggled on with legal aid and no support other than us and a women’s aid agency.’

Despite all her efforts to secure freedom and safety, on July 5th 2011, Ruma was murdered in the bedroom of her own home. Abdul had forced his way into the house and strangled her with her own scarf. Police later found out he had tried to set the scene so it looked like she had attacked him first. She was 29.

Onjali’s family continue to live with the trauma of Ruma’s murder. ‘My mum underwent three years of counselling for the guilt she felt. You don’t really ever believe that someone you love will be taken from you in this way. My way of coping is trying to make sure it doesn’t happen to anyone else. I tell my nieces all the time that Making Herstory is their mother’s legacy – it is their charity.’ 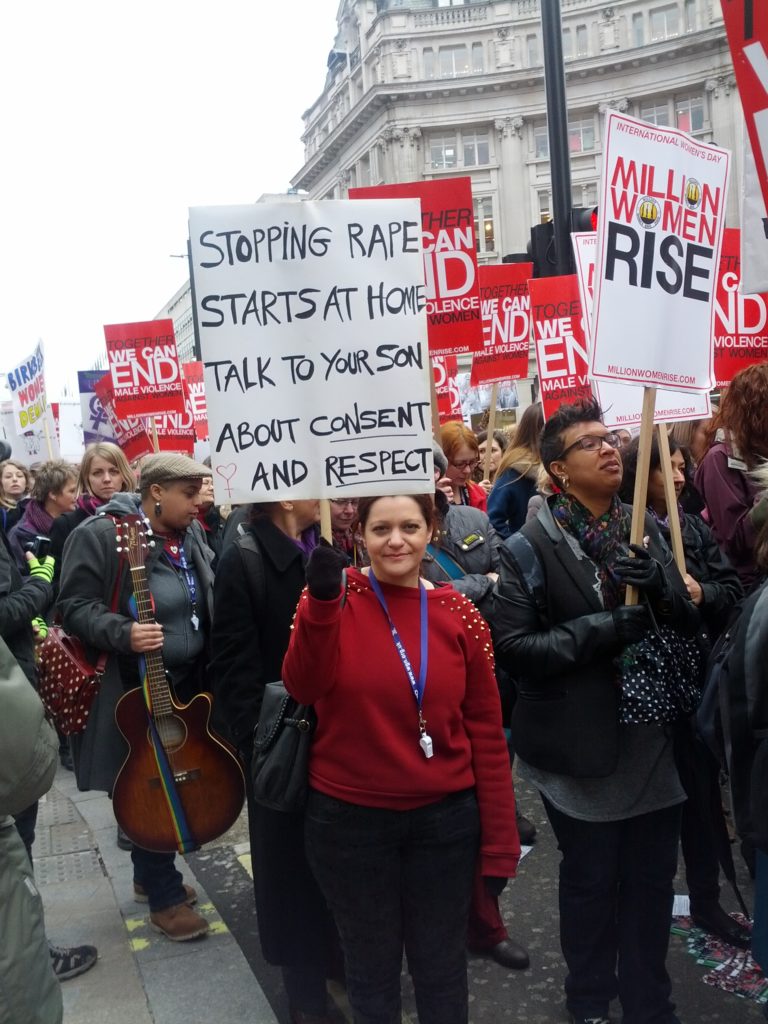 With a motto of doing ‘whatever it can, whenever it can,’ the charity works to put a stop to the abuse of women through any means possible. The charity supports rape victims and acid attack survivors; tours anti-domestic violence plays in schools and produces documentary films on the impact of rape in war. It also works with women’s shelters; sends aid missions to refugee camps and works where it can to re-train government officials and wider agencies. ‘We need to make women and girls aware of their human rights. We need men and boys to explore why violence against women is a default position and sold to us as a norm. We need judges, the police, teachers, GPs and MPs to know and truly understand the different shapes that violence can take. This is not a “women’s issue” – it’s everyone’s issue. We all need to be tackling this epidemic together.’

As well as fighting against gender violence on a global scale, Onjali finds herself battling wars on a personal front too. ‘As a Muslim feminist the hardest thing to deal with is people’s misinterpretations of my faith and who I am,’ she says. ‘When people see me with a scarf on my head at a feminist rally or speaking against misogyny, they get confused. We need to have those difficult and honest conversations to find out how racism, prejudices and misogyny work on all levels. And how integral all of it is to the murders, rapes and abuses of women the world over at the hands of men or male-led systems. There are too many mothers, sisters, aunts, daughters and amazing women dying for us not to.’