My guitar is my Kalashnikov

Mer Ayang’s guitar is her ‘weapon of peace’. Yee-Liu Williams hears how song can overcome anger in the aftermath of war.

Before South Sudan gained independence in 2011, Mer Ayang journeyed to the capital Juba to help build a new nation after decades of war. In December 2013 fighting between militia factions erupted and another war broke out. Mer escaped to neighbouring Uganda in the back of a truck with seven family members and ‘Kalashnikov’ – her prized guitar.

Kalashnikov was so named because she was often stopped and searched. She recalls the scene at various checkpoints, with men asking ‘You have weapons with you?’ and holding real Kalashnikovs to her ‘big box’. ‘My guitar is my Kalashnikov,’ she explains, ‘my weapon of peace.’

Since civil war broke out in 2013, tens of thousands of people have died in the fighting in South Sudan and an estimated two million have been displaced to neighbouring countries. Mer’s songs are born out of  pain, frustration and anger, and a belief that music is a ‘harmonious tool’ for healing. She did not plan to be a musician, but knew ‘I had a song in me’. Her soulful, jazzy songs carry a clear message of the importance of putting unity before tribe. ‘I was performing to a broken nation who only know about death on a daily basis,’ she says.

Mer was part of a movement of young artists and musicians, who used their talents to express their anger and frustration at what was happening in South Sudan. Her best-known song ‘Southern Sudanese’, composed while jamming with friends, went viral because it expressed ‘what we are all feeling’. It called for an end to division and tribalism, at a time when people were being subjected to unspeakable atrocities based on tribal ethnicity. She is emphatic: ‘The world needs to know the realities of what is happening in South Sudan.’

Before 2011, she and her family lived in Khartoum in northern Sudan. ‘It was home but not home,’ she says, because she ‘never fitted in’. Ethnic background was enough ‘to destroy trust, create fear, prejudice and discrimination’.

Mer has special refugee status, sponsored by the Red Cross, and is fortunate to have been granted asylum in Switzerland. The mental scars have not healed and the time is not right for her to tell her full story: the memories are overwhelming and ‘numbing’. The fear of reprisal still hangs over her. But each time she takes to the stage she gets stronger. She mourns for the many thousands of women who have suffered, and asks, ‘What about other women like me?’

She acknowledges that the horror of war is ‘beyond  the understanding and experience of most people’ who live in peaceful Europe. She talks of the ‘unspeakable horrors’ inside refugee camps where the consequences of mental trauma and breakdown are significant. She observes that ‘music is a language that taps into faith’ and can help in the healing process. Her aim is to ‘tickle the empathetic sensors’ through music and song and to raise awareness so that those who ‘don’t know our story’ will take action.

Her songs cry out for the women and young girls who suffer in silence. The aftermath of war, where ‘it is the bullets that speak’, leaves mental scars of hatred and division, as well as physical scars. ‘We cannot address anger without an approach to healing,’ she says. ‘We have to question ideologies and to ask “what can I do about it?” and “what can you do about it?”’

Mer campaigns for professional support to help refugees deal with post-traumatic stress resulting from their war experiences. The problems of those whose mental health breaks down is exacerbated in refugee camps, where mental trauma is often viewed as extreme behaviour, associated with terrorism, especially for single, young men.

As an ambassador for peace, Mer’s voice is strong. She calls out to religious and political leaders and each one of us to take responsibility for what is happening in her country and across the world.

She sits with Kalashnikov and crescendos into song. Her hope is that one day she will be able to sing in freedom, in her home country, a united South Sudan, and feel accepted for who she is. 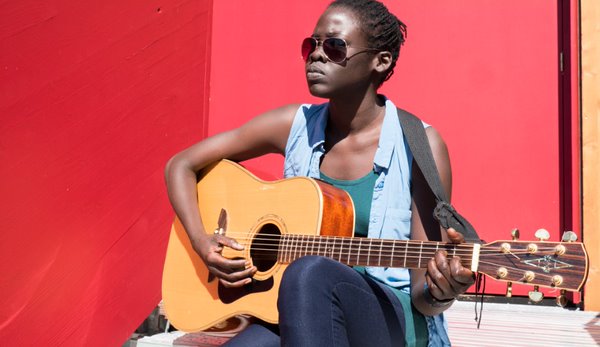