Running with the bishop

Barbara Down is a few months into her role as Lady Mayoress of Newcastle upon Tyne. She talks to Jacqui Daukes.

When David Down became Lord Mayor of Newcastle upon Tyne in May, his wife Barbara found herself pushed into the limelight, supporting him in his official duties. ‘I’m someone who doesn’t want much attention paid to me,’ she says. But, to her surprise, she’s relishing the chance to connect with people from all areas of the city’s life.

David’s duties include welcoming royalty, foreign mayors and diplomats to the city, unveiling plaques, speaking in schools and visiting community- and volunteer-led projects and charities. One regular event is the monthly Citizenship Ceremony in the Banqueting Hall of Newcastle’s Civic Centre, when the Lord Mayor formally welcomes people from different parts of the world as they become British citizens. Barbara loves getting to know people over tea after the ceremony.

Barbara, who is Head of Personnel with Initiatives of Change (IofC) UK, sees her role as encouraging, helping and supporting David. ‘Being a nurse and later working with IofC has helped prepare me, as my work involved caring for people.’ Even so, the new position has been a challenge.

‘Initially I was apprehensive about talking to important people,’ she says. ‘However some of the times I have been most nervous about have turned out to be the most precious.’ She sat next to Baroness Tanni Grey-Thompson – the Chancellor of Northumbria University and former Paralympic athlete – at a graduation dinner and found her ‘really inspirational’. She has learnt how not to be thrown by someone having a title. ‘I can now even enjoy a meal at a table full of university professors once I have figured out what we have in common – quite often family life!’ 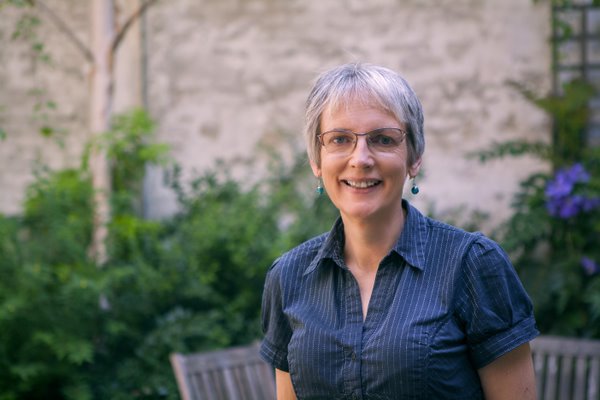 When David opened the wheelchair race of the Great North Run, Barbara met Kathrine Switzer, who was there to start the main road race. Kathrine was the first woman to run in the Boston Marathon in 1967. A male official tried to pull her out of the race (she had applied using her initials), but her boyfriend and other runners intervened and Kathrine completed the race.

‘Kathrine challenged me to do the Great North Run next year. I accepted, even though to begin with I couldn’t even run around the block! One of the other folk at the start of the race was the Bishop of Newcastle and to my surprise the following week she offered to train me. We now go running together once a week using the NHS app Couch to 5K.’ Barbara also goes running with two other women as well.

Barbara finds much interest in her work with Initiatives of Change. ‘I was unexpectedly asked to say something at a Muslim academy school for girls. I found myself looking at the young women at the back of the hall and Creators of Peace, one of IofC’s programmes, immediately came into my thinking. I talked about women being peacemakers, starting in the home and local community.’ Barbara and a friend hope to train to run Creators of Peace Circles, small community gatherings where women work through material designed to deepen their understanding of each other and their role as peacemakers. Several of the women at the academy said they would be interested in participating.

Another unforgettable visit was to a Roman Catholic run project, which cares for asylum seekers and refugees. ‘We met amazing volunteers who regularly support them with small amounts of money, English classes, food and clothes. Many have to sofa-surf or sleep rough as all benefits, including accommodation, cease if they lose their asylum application, even if they are appealing against the decision. I met a young Syrian doctor who had recently arrived in the UK on top of a lorry. He showed me a photo of his wife and new baby – she couldn’t accompany him as she was about to give birth. Now when I go food shopping I am very aware that I could be spending in that one trip what the asylum seekers might have to exist on for a whole week.’

These visits are giving Barbara ideas about what she could get involved in when she retires. ‘I had no idea so many things were going on in Newcastle. It would be great to contribute in some way.’ Asked what she is learning from all these encounters, she replies, ‘We’re all the same underneath and if you believe in something you can approach anyone and talk about it. We can surprise ourselves at how much we have to give. One of the highlights of the year so far has been meeting people a bit like me, who believe they can’t do much, and encouraging them to be a bit more daring.’