Jamila Sajid tells Jonathan Ranger that Muslim men have no right to dictate to women – and her husband, an Imam, agrees.

When Jamila Sajid was eight, her headmaster told her to wear a hijab and burka. Her two sisters conformed, but she rebelled. That day she told her mother, ‘My school days are finished’. Over 50 years on, she continues to challenge stereotypes about how Muslim women and men should behave.

Jamila was born poor in a remote village in East Pakistan, now Bangladesh. Her father was a Muslim firefighter who had lost one eye and only came home once a month with 69 rupees. Her mother was a traditional Indian Hindu-turned-Muslim who wore a burka all her life. ‘I listened to my mother sometimes,’ says Jamila, ‘but nobody can say anything to me.’ She became a tomboy, with her father’s loving, independent spirit.

The family moved to Lahore, West Pakistan, when her oldest brother, now Professor Irshad Siddiqui, won a scholarship and married. He took on extra teaching to enable his sisters to continue their schooling. In Lahore Jamila found freedom of choice rather than traditional custom. ‘Education helps emancipation, dispels taboos and keeps Islam moderate – the under-educated become fundamentalists as they’re easily influenced,’ she reflects today.

At 16, Jamila married Abduljalil Sajid, a young academic and Imam. At first, he ‘wished’ her to cover her hair – she refused. ‘It would be dishonourable for me to force you,’ was his attitude. They are open-minded with their three daughters and two sons, supporting them as independent people expressing their own personalities. ‘I am lucky I married an Imam who is “moderate”,’ says Jamila. Sajid, who is acknowledged as an authority on Islam, comments, ‘As Imam and husband, I have no right to tell my wife what to wear or how to behave.’

Shortly after their marriage, Sajid travelled to Britain to start a PhD. Jamila joined him later, and they set up home in Brighton. Sajid established the first mosque in Brighton, and served as its Imam for 35 years. He helped to establish many other mosques across the UK, gaining the honoured title of Mufti. Jamila ran the Muslim Ladies Circle, with women referred through mosques and for anyone of any faith. She worked, to gain economic independence, and as a community interpreter in Urdu, Bengali and Punjabi, liaising with police, hospitals, lawyers and immigration.

Jamila points out that in Islam, as in Christianity, ‘culture and religion get horribly mixed up’. True Islam is surrender of self to God’s way of peace, respect, equality and mutual support. ‘We must stop men’s attitude to women, by education in schools and mosques.’

She regrets the influence of ‘ignorance and false teaching’, and how few people really want to change the status quo. ‘Religious leaders have power – but they abuse it, not wanting to give equality. How do we get through to them? If parents are not well educated, they can’t teach their children the truth. They think going to mosque will make children good Muslims, but young people are easy targets for brainwashing and radicalisation.

‘Segregation of women from men in the mosque is not Islamic or Qur’anic. We’re supposed to worship together equally – but men get distracted by women bending forward during prayers, so women are hidden away. That’s cultural, not what God wants. Our word kawami means men have a duty towards women, to care and provide, not dominate. It’s about honour.’

In September 2006, at the invitation of the British Council in Karachi, Jamila shared a platform with her husband on ‘There is no honour in honour killing’. ‘Honour killing is a pre-Islamic custom, based on ignorance and disregard of morals and laws. It’s against the teachings of Islam and Shariah law: all forms of life are sacred,’ she explains. 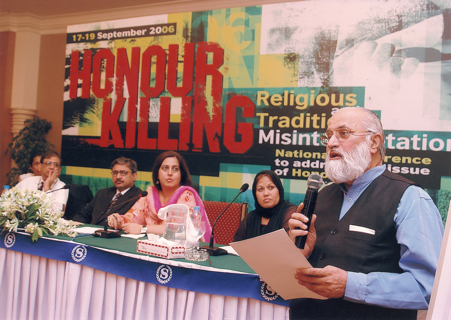 Imam Sajid addresses the ’There is no honour in honour killing’ conference at the British Council in Karachi in 2006.

Honour killings in the UK have risen 53 per cent since 2014. We discuss the recent case in Surrey of an uncle kidnapping, raping and cutting up his niece before putting her body in a deep freeze because ‘she brought dishonour upon the family’. Jamila comments, ‘Muslims can meet or marry whomever they love.’ One of her sons married a Jewish woman and the other a Christian. ‘All are children of God,’ she says.

‘Training should be given at high school, and to the judiciary, police and scholars, to completely eradicate honour killing and abuse of women,’ she insists. ‘Female genital mutilation, forced marriage and honour-based violence, child trafficking, rape and selling daughters are not Qur’anic.
‘I say to women: be strong. Don’t let your husband or any man force you to do what you needn’t do. You have rights to be happy, contented, protected and cared for. Or find someone else!

‘To men I say: respect, love and care for one another. No abuse – your wife is equal, not a servant. You are the main provider, and a working wife keeps her own earnings.

‘To children I say: be good people, value everything from your parents, who should love you unconditionally.

‘To all I say: be unselfish and forgiving; we all make mistakes. Bad deeds you can overcome by good deeds. Help each other understand truth and love. Read and learn what the Qur’an and Islam really teach.’